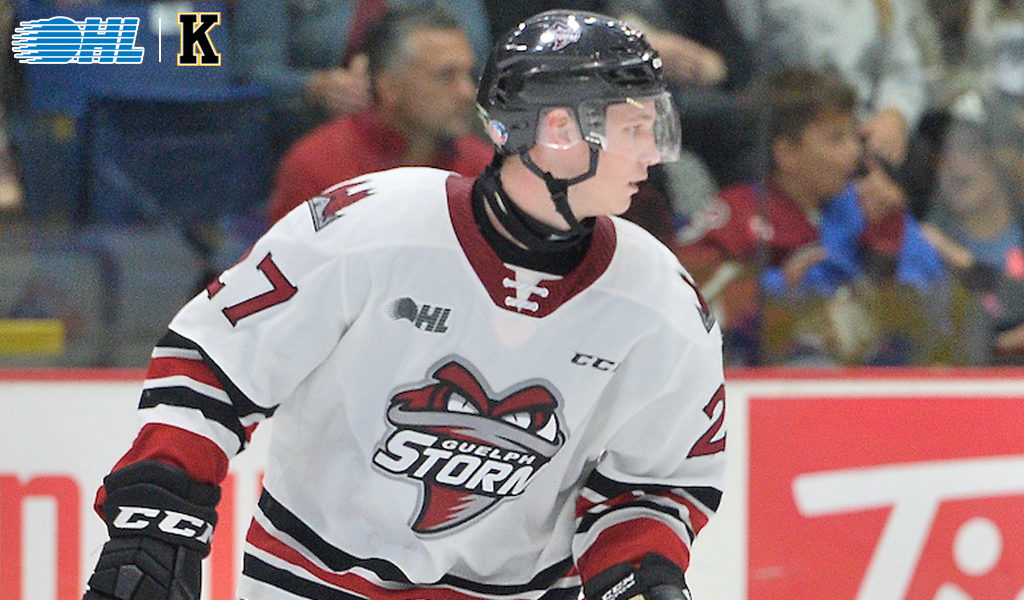 “Don’t stop believin’
Hold on to that feeling.”

Those words, iconic lyrics from “Journey’s” 1981 hit song, “Don’t Stop Believing,” fit well into the life of Jacob Roach, who was born 19 years after the release. To get to the Ontario Hockey League, he has embodied the chorus on his winding road to Kingston.

As he sat in his residence room at Brock University, Roach knew he wanted to be playing hockey, but at 18-years-old, he was already out of the game as a first-year student.

Just weeks earlier, he was cut from the Sudbury Wolves training camp, marking the third consecutive season he had not cracked their lineup after being selected in the eighth round in 2016. While he had a strong season with the OJHL’s Pickering Panthers, he and his parents decided university was the route for him.

Jacob Roach has played at nearly every possible level of junior hockey in the province. He is now focused on succeeding with the Kingston Frontenacs.

“I hung up the skates, moved out to Brock, moved into residence, the whole nine yards,” said Roach. No longer playing hockey, It only took a matter of weeks to realize that he was not in the right place. “I was getting bored of doing schoolwork in my res room,” he said, “I thought maybe school was for me at that point, but I wasn’t ready to give up hockey yet.”

His absence from hockey did not last long, however. After just two weeks away from the game, he missed hockey, and hockey missed him. Roach had a connection with Frank Girhiny, the coach and GM of the GOJHL’s St.Catharines Falcons, who heard that he was not playing anymore. “He asked if I wanted to join, and that was the best thing that ever happened to me.” The coaching staff gave Roach ample opportunities in various situations, and he scored 136 points in 63 regular season and playoff games. “I was just playing for fun over there; they put a lot of trust in me, so I ended up having a pretty good season.” After dominating the GOJHL, he caught the eye of the Guelph Storm, finally breaking into the OHL in 2019.

Through his young hockey career, the Brooklin, Ontario native has played at nearly every possible level of junior in the province. At each point, whether in the OHL, OJHL or GOJHL, he garnered valuable experience that is helping him as he anxiously awaits his final season of junior hockey.

“In the OJHL, I learned what it was like to be a junior hockey player. In the GOJHL, I learned how to play in all different situations,” said Roach. Although he is only in his second year in the OHL, he is confident that his maturity and experience through the levels can help the younger players.

While the jump to the OHL made hockey the focus rather than school, being a student is still a big part of who he is. Last season and into this year, he has continued his studies at Brock, albeit on a part-time basis, which keeps him busy, while hockey has been largely affected by provincial health restrictions.

When he was traded to Kingston, leaving the team that he had broken into the league with was challenging; however, he was ecstatic to join the Frontenacs. “I know they’ve got a good core,” he said, “I’m excited for it. I know that people don’t necessarily see us as a front runner, but we’re going to surprise some people,” said the 20-year-old eagerly awaiting his debut.

As Roach awaits for hockey’s resumption, he keeps fit while also enjoying things away from hockey. “I like to read; I read Max Domi’s book about his experience in hockey with diabetes, which was really interesting to me.”

He has gotten to know his Frontenacs teammates and coaches over Zoom and, despite not playing a game yet with them, is already feeling like a valued member of the team. “They added me to the group chat right after I was traded, and we do a lot of things online… I’ve played against a few of these guys for a while, so I’ve gotten to know them.”

It was sitting in his residence room at Brock University just under three years ago when Roach realized that he was not done with hockey, so he rolled the dice one more time. Now entering his final year of junior, he cannot wait to hit the ice donning Kingston colours, but he is also confident that Kingston won’t be his last stop in the sport that he loves.