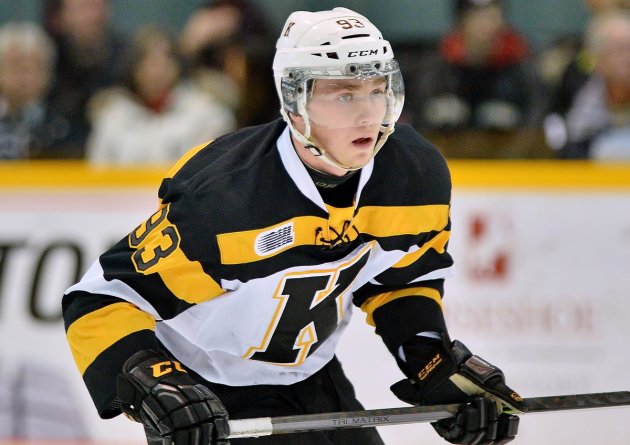 Toronto, ON – The Ontario Hockey League today announced that Calgary Flames prospect Sam Bennett is the Pioneer Energy OHL Player of the Week for the week ending March 15 after leading the league with 10 points in three games scoring six goals and four assists with a plus-minus rating of plus-4.

Bennett’s three multi-point games helped the Frontenacs earn three victories last week securing sixth place in the Eastern Conference standings heading into the 2015 OHL Playoffs beginning next week.  Last Tuesday night he scored a goal and three assists earning first star honours in a 6-2 road win over the Peterborough Petes, then scored twice including the game-winner on Friday in a 5-2 win over the Belleville Bulls.  Bennett’s week wrapped up Saturday with another first star performance with four points scoring his first hat-trick of the season and third of his career which included another game-winner as part of a 6-0 victory over the North Bay Battalion.

Bennett, an 18-year-old from Holland Landing, ON, is playing in his third OHL season with the Frontenacs.  Since returning to action in late February, the Flames fourth overall pick in 2014 has scored 11 goals and 10 assists for 21 points in nine games.

Watch video highlights of Bennett and the Frontenacs against the Bulls and the Battalion.

Also considered for the award this week was St. Louis Blues prospect Robby Fabbri of the Guelph Storm who scored four goals and four assists for eight points in two games, and Jesse Barwell of the Saginaw Spirit who scored four goals and three assists for seven points in three games.  In goal, Devin Williams of the Erie Otters went 3-0-0-0 with one shutout victory posting a goals-against-average of 0.67 and save percentage of .975.