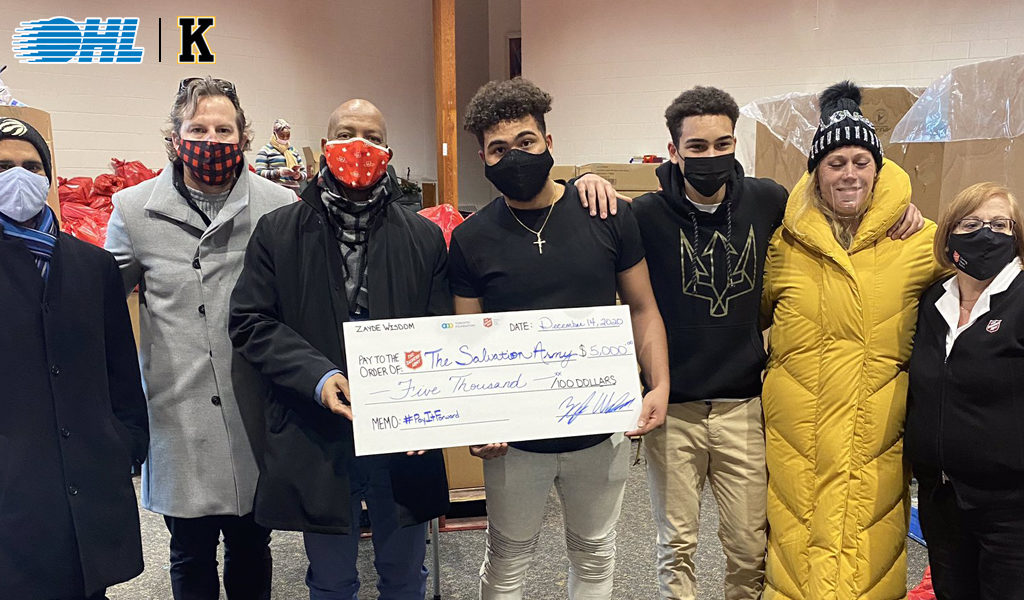 Zayde Wisdom remembers what it was like to wake up on Christmas morning as a little kid. When he looked under his family’s Christmas tree for most years, he did not see much, so when he signed his NHL Entry-Level Contract with the Philadelphia Flyers, he wanted to make sure that does not happen for as many kids as possible.

Even though he was a fourth-round selection by the Flyers, he was one of the first players from the 2020 Entry Draft to sign a contract.

Wisdom’s Christmas’s in the past often involved the Salvation Army and the food bank, something he has not forgotten. Remembering that, the 18-year-old Frontenacs forward donated $5000 to the Salvation Army, the same branch that helped him when his family needed it most.

“I have a lot of tough memories, so my goal one day is to just help as many kids as possible from struggling growing up,” he said, “ I just want to give back to the community that gave so much to me.”

Growing up, many of Wisdom’s clothes came from the Salvation Army, and now that he finds himself in a position to give back, he never gave it a second thought. “I don’t think I will ever be able to pay them back,” he said. Still, he wants to brighten up the lives of those who are in similar situations as he was.

Flyers prospect Zayde Wisdom has just donated $5,000 to the Salvation Army in his Toronto neighbourhood of Weston.

A text from his mom: “Zayde wanted to give to them first. This is just the beginning of paying it forward.” pic.twitter.com/BmjQ83sYX7

Wisdom had thought of the donation for a while, but before signing his contract, he was never in a position to do so. Although he and his family have not been able to give financially, Zayde learned the importance of giving back from a young age. “We always give all our old clothes and other things that we don’t use anymore [to the Salvation Army],” he said over the phone. Although this was the first time he made a monetary donation, he and his family have already given many clothes and used hockey gear.

In an ideal world, Wisdom would love to be helping out with the Salvation Army’s in-person holiday season efforts this year; however, due to the current risks associated with being around people, he has to take a pass. “With training camps coming up soon, not just with the Fronts, but even maybe the flyers, I have to watch who I am around,” Wisdom said.

Without being able to contribute in person this year, he has thought of other ways to help the community when things are safe. He has many ideas of how to help out, but one that stands out to him is giving back to some hockey players. “I already have some plans to hopefully take a kid or two under my wing and take them through a summer like me. All the early wakeups, the late-night lifts and skates, just giving back to people like people have helped me.”

“Kingston put me in the position to succeed.”

Fourth round @NHLFlyers 2020 #NHLDraft pick Zayde Wisdom reflects on how the @KingstonFronts have supported his growth over the past two seasons.#MeetTheFuture | @KubotaCanadaLtd pic.twitter.com/QPnRn4ABDE

While word came out about Wisdom’s donation on social media and earned a lot of public praise, the praise does not affect how he thinks about the giving. “I wanted to do this quietly,” he said, and although it’s public about what he contributed, you may notice he has never reposted any of the praise. “Giving back is something you should just have in you and your heart. I would never boast about it, or repost it anywhere or send it around.”

Christmas this year is going to be different for everybody, but Wisdom knows how tough it can be, even without worrying about a virus. With his experience and kind heart, he has given back to his community to make sure as many kids as possible can have the holiday season they deserve.