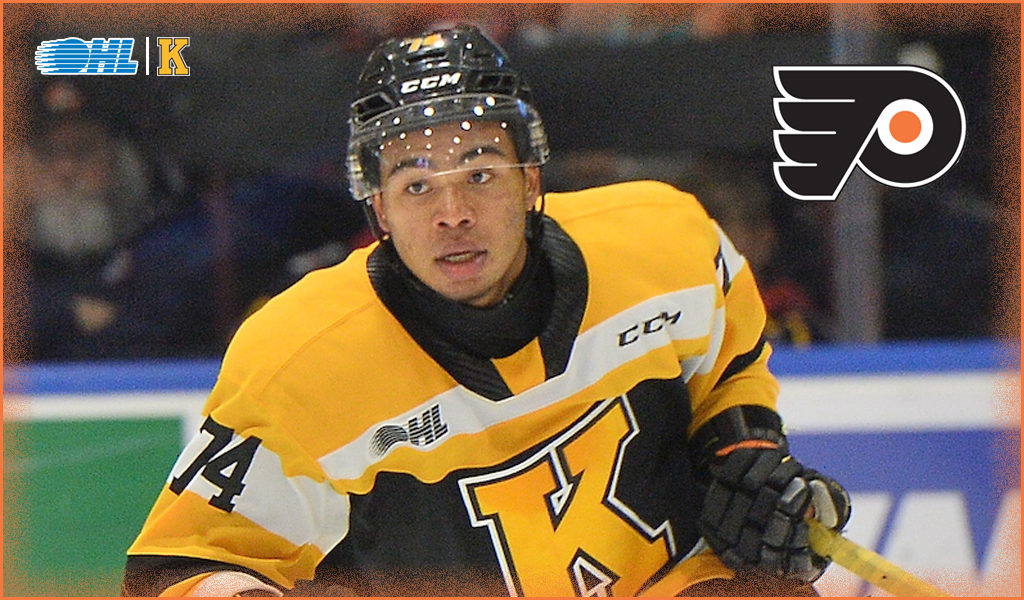 Philadelphia, PA – The Philadelphia Flyers announced today they have signed Zayde Wisdom, the club’s fourth round selection (94th overall) in the 2020 NHL Entry Draft, to a three-year entry-level contract, according to President of Hockey Operations & General Manager Chuck Fletcher.

“Somewhat surprising to us, Wisdom was still available in the late third and we scrambled to try to pick up an extra pick there to select him,” said Fletcher following Day Two of the Draft. “I think he’s got an understated skill level. His hands are pretty good. He has a good shot. He has good instincts. He goes to the right places on the ice. When you combine that with his relentless pursuit of pucks, his ability to forecheck and finish checks, it’s a pretty attractive package.”

Congratulations Zayde Wisdom!@KingstonFronts forward has been named the 2020 recipient of the @NHL‘s E.J. McGuire Award of Excellence.

* He is the first member of the Flyers 2020 Draft Class to sign an entry-level contract.

* The Flyers moved up in the draft to the 94th overall pick by trading two selections to the Tampa Bay Lightning (116th & 147th) in order to select Wisdom.

* He is the recipient of 2020 E.J. McGuire Award of Excellence, which is presented annually by the NHL to a candidate who best exemplifies commitment to excellence through strength of character, competitiveness, and athleticism. Current Flyer forward Travis Konecny (2015) is also a former recipient of this award.

* He looks up to former Flyer Wayne Simmonds and was a regular participant in the annual Wayne’s Road Hockey Warriors Charity Ball Hockey Tournament for underprivileged children.

* Zayde credits the guidance of trainer Derrell Levy, who started in-tech high performance training and works with several NHL clients with helping him develop as a young hockey player.

* Wisdom was raised by his mother, Mairri, and his grandmother, Kitty. His mother worked multiple jobs so that he could play house league hockey.

* His brother, Zaccharya, was a sixth-round pick of the OHL’s Niagara Icedogs in 2020 (102nd overall) after skating for the Mississauga Senators under-16 team in the Greater Toronto Hockey League in 2019-20.