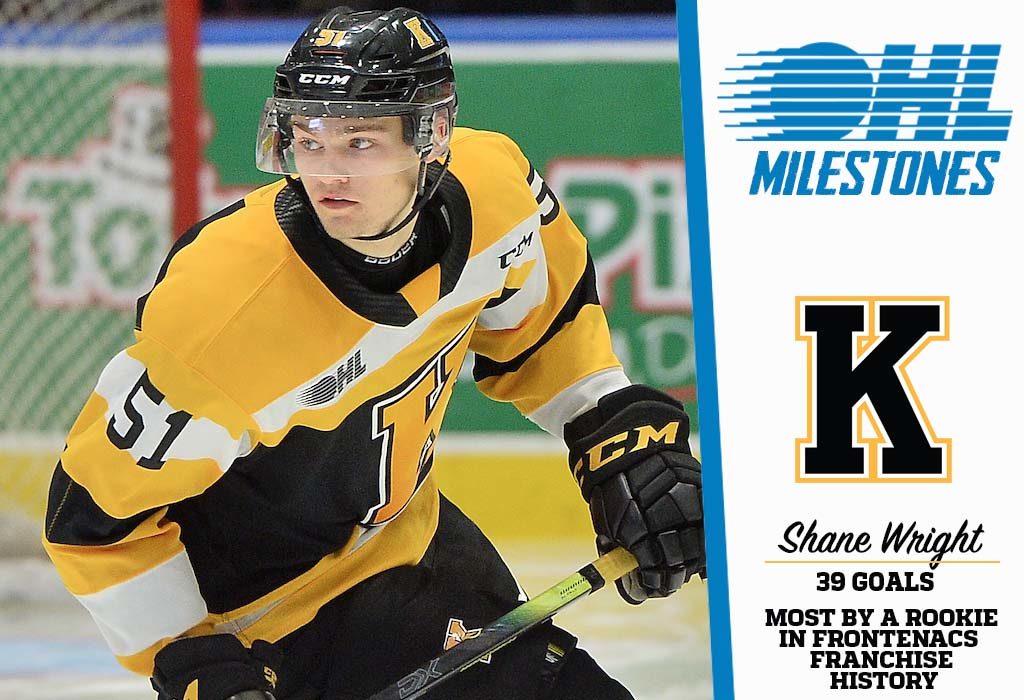 Shane Wright capped an incredible month of February by making some Frontenacs franchise history on Saturday in Flint.

The 16-year-old scored his first career OHL hat-trick, surpassing Bernie Nicholls to become the top-scoring rookie in Frontenacs all-time franchise history with his 37th, 38th and 39th goals of the campaign. Nicholls scored 36 as a member of the Kingston Canadians back in 1979-80, doing so as an 18-year-old.

The kid’s in the clear and Zayde Wisdom finds him.

It’s @KingstonFronts history as @shane_wright51 surpasses Bernie Nicholls (1979-80) for the most goals by a rookie in franchise history with his 3️⃣7️⃣🚨 pic.twitter.com/ehveVkxz4N

Wright’s first star performance fuelled a 6-1 win over the Firebirds, handing them just their second loss in the last 19 games as the Frontenacs remained deadlocked with the Niagara IceDogs for the eighth and final playoff spot in the Eastern Conference.

Wright’s four-point night on Friday gives him 66 points (39-27–66) through 54 games this season, the same point total a young Connor McDavid accumulated through 63 games in his exceptional status season with the Erie Otters back in 2012-13.

The first overall pick of the 2019 OHL Priority Selection, Wright guided the Don Mills Flyers to an OHL Cup title last spring, also winning a GTHL Championship with the highly decorated squad. Wright’s Minor Midget season included 150 points (66-84–150) over 72 games as he was named GTHL Player of the Year. His 18 points (8-10–18) over seven games at the 2019 OHL Cup Powered by Under Armour fell one shy of McDavid’s event record set in 2012.

The Burlington, Ont. native won’t be eligible for the NHL Draft until 2022.

History was made tonight in Flint, Michigan.@shane_wright51 past Bernie Nicholls for the all-time rookie goals lead in Kingston’s franchise history.

Shane will be the first person to credit his teammates for the amazing accomplishment.