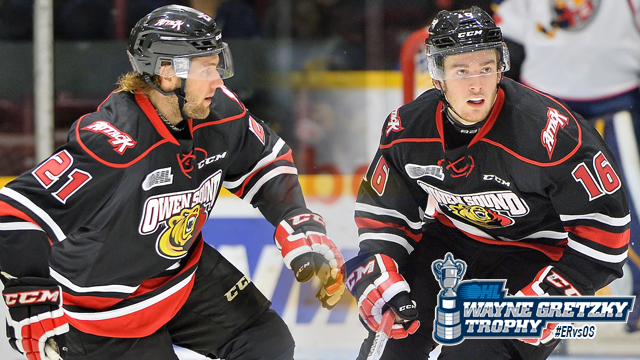 It takes a special group of players to set franchise records in the Ontario Hockey League.

The 2016-17 Owen Sound Attack, who won a club record 49 wins and eclipsed the century mark for the first time ever, are loaded from top to bottom.

Between-the-pipes is goaltender Michael McNiven, the franchise’s leader for career shutouts and single season wins, while captain Santino Centorame became the all-time Attack leader for points by a defenceman.

It’s also easy to look at forwards Petrus Palmu and Nick Suzuki, with 98 and 96 points respectively, to understand the Attack are a force offensively.

However if team identities are defined by players, then Kevin Hancock and Jonah Gadjovich might very well be the epitome of a club competing for their first Wayne Gretzky Trophy since 2011.

The two draft eligible forwards received high praise in the Western Conference Coaches Poll in categories that are the essence of this year’s Attack; underrated and improved.

“For both of us, me and Jonah, I don’t think we expected to get the points that we did this season,” said Hancock, voted Most Underrated Player by Western Conference coaches.  “But we had a great line with Nick (Suzuki) for most of the season and I think our chemistry really grew as the season went on.  We really played into our roles which really complimented each other.”

The 19-year-old from Mississauga delivered 30 goals and 85 points in his third season rising to 91st among North American prospects for the 2017 NHL Draft despite his second year of eligibility.

“I didn’t put up a lot of points last year,” he added.  “Coming into this season I had some goals in mind for myself personally, and I reached those goals and even surpassed them.  It was an honour to be recognized (as underrated) because it means coaches are looking out for you and aware of you on the ice.”

Coaches took note of Hancock’s offensive abilities as well as his 200-foot presence by also voting him the west’s second Best Defensive Forward helping form an effective unit at both ends of the ice.

“Nick can use his speed and put pucks towards the net and we (Jonah and I) can create havoc,” Hancock added.  “We’ve got a lot of skill on that line with Nick and we try to make plays.”

While Suzuki may be a sure-fire first rounder in June, Gadjovich has also caught the attention of OHL coaches and even scouts this season rising to 39th in NHL Central Scouting’s Final Rankings.

“I didn’t expect to put up 74 points,” Gadjovich said with a smile.  “As a line I think we really clicked.  Ever since we (Nick, Kevin and I) started playing together we moved the puck well and all bought into our line and that’s when we had our success.”

Gadjovich’s 74 points included 46 goals in 60 games after scoring just 14 in 66 contests as a sophomore last season.  His efforts earned him the Most Improved Player label and third Most Dangerous in the Goal Area accolades from Western Conference coaches.

“I was very honoured,” added the 18-year-old Whitby native.  “There’s a lot of great players in this league who are constantly improving.  My goal coming into the year was to be that much better than last year and the year before.  This year I wanted to contribute more and I bought into my role a little bit more and it really worked out for me.”

Both players see their individual recognition as a reflection of team success and progress made over the course of a season where many underestimated the Attack in the powerful Midwest Division.

“Heading into this season I don’t think there were many expectations surrounding our team,” Gadjovich said.  As the season progressed the team started clicking and we really started following our game plan.  The coaches really worked with us and we became one of the top teams in the league and I think that’s a direct reflection of our work ethic and our coaching staff.”

The influence of OHL Coach of the Year Ryan McGill helped the Attack become the league’s most improved team increasing their win total by 17 and point total by 27 from 2015-16 while rattling off 15-straight wins midseason.

“Every individual exceeded their expectation this year,” Gadjovich said.  “Because of the buy in from each guy I think that’s why we’re in the conference final and why we did so well this season.”

Excitement in Grey County is building as the Attack duel the Erie Otters for supremacy in the wild west this year, but also when a quick scan of the roster reveals a core of eligible returnees like Suzuki, Hancock, and Gadjovich.

“That’s what junior hockey is all about.  This is my third year now and I’ve been playing with a lot of these guys for three years now, some for two years now, and I’m excited for the future and even right now we want to win.  We want to play for a Memorial Cup and we want to be champions.  For a four or five year junior hockey career that some guys have I’m excited to be part of something special in Owen Sound.”