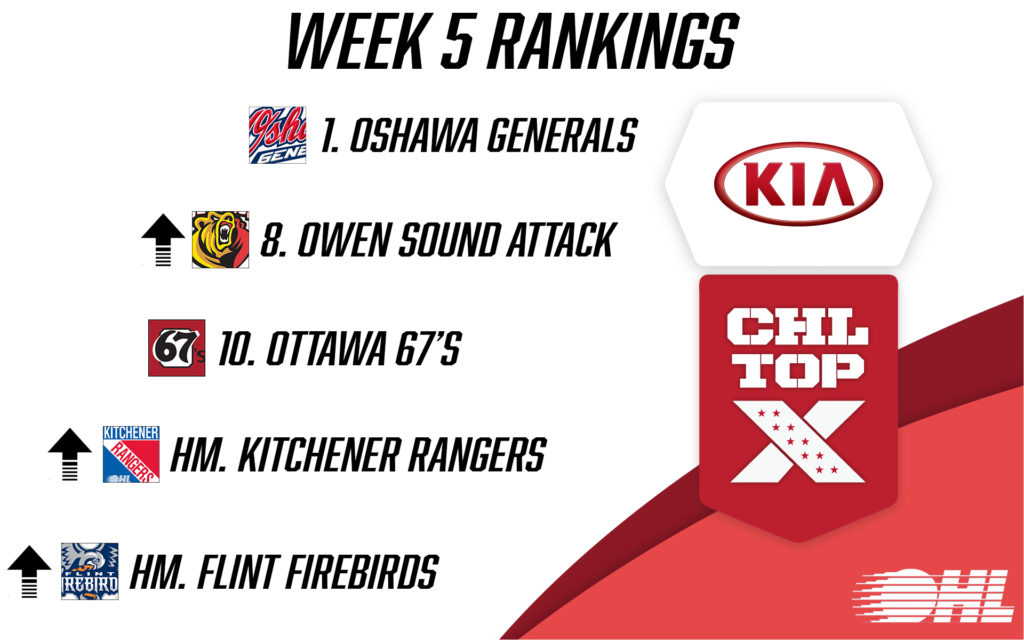 Toronto, ON – The Canadian Hockey League today announced the week five edition of the Kia CHL Top-10 Rankings for the 2019-20 season.  The weekly rankings of the CHL’s Top-10 teams are selected by a panel of National Hockey League scouts.

The Oshawa Generals are the CHL’s top-ranked team for a second straight week, improving their franchise-best record to begin the season to 9-0 with road wins over North Bay and Sudbury. The Generals nearly saw their streak slip away on Saturday, falling behind 3-0 to the Wolves before charging back with five third period markers to take a 5-4 decision. The Generals feature four players with double-digit point totals in Brett Neumann (6-8–14), Allan McShane (4-9–13), Oliver Suni (3-10–13) and Ty Tullio (6-5–11).

The 6-2-0-1 Owen Sound Attack are the eighth-ranked team in the Canadian Hockey League this week, skyrocketing up the rankings on a current four-game winning streak. The Attack scored wins over Kitchener, London and Sault Ste. Marie last week as goaltender Mack Guzda went 3-0 to earn OHL ‘On the Run’ Player of the Week honours. Forward Barret Kirwin (3-2–5) and overage defenceman Brady Lyle (0-5–5) were also instrumental to Owen Sound’s success. The Bears look to keep things going on Saturday when they host the Sudbury Wolves in their lone game of the weekend.

The Ottawa 67’s hold steady at tenth on the weekly rankings following a 6-1 win over the Mississauga Steelheads and a nail-biter of an 8-7 comeback overtime triumph over the Kingston Frontenacs. Ottawa trailed Kingston 5-1 after one period on Thanksgiving Monday, rallying for a momentous comeback capped-off by Kevin Bahl‘s overtime winner. The 67’s are led in scoring by New Jersey Devils prospect Mitchell Hoelscher (6-8–14) while 2020 NHL Draft prospect Marco Rossi (2-3–5) had five points in his return to the lineup this past weekend. The 6-3-0-0 67’s prepare for a pair of games on home ice this weekend as Peterborough and Hamilton visit the nation’s capital.

Two OHL teams received an honourable mention in Week 5 as the Kitchener Rangers defeated Windsor and Sudbury, improving to 5-0 on home ice to get onto the radar. The 5-2-0-0 Flint Firebirds are also flying high after defeating the Peterborough Petes 6-2 on home ice Saturday night. 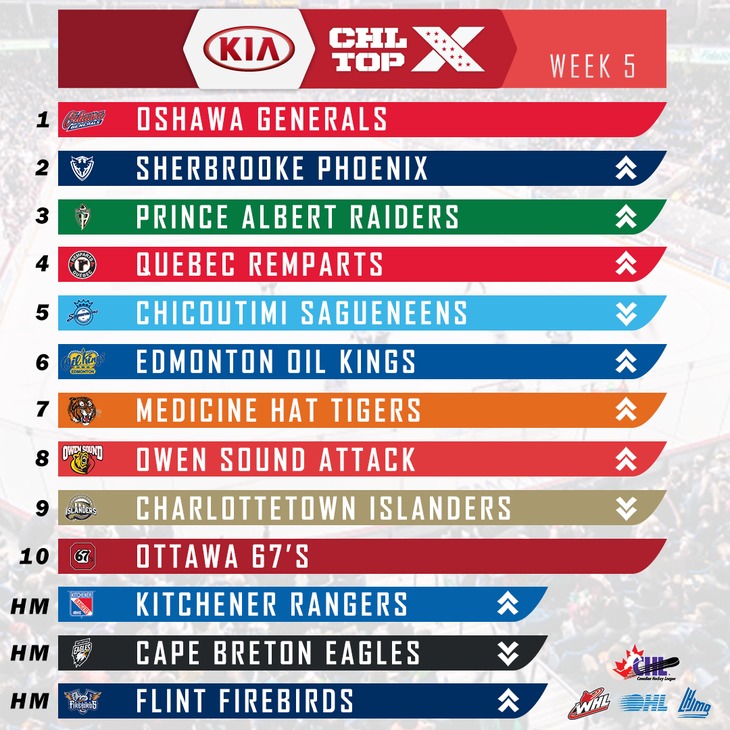