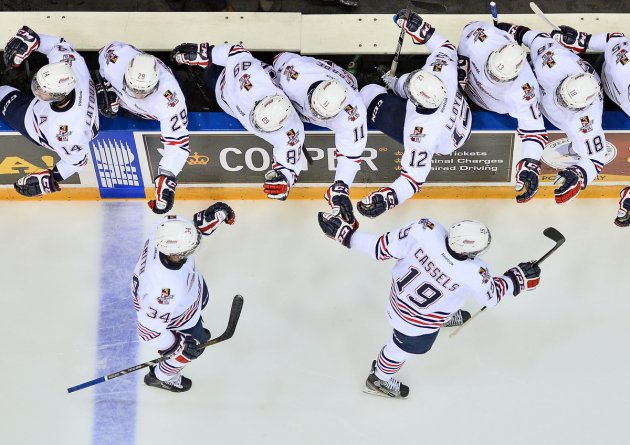 The Oshawa Generals clinched first place in the Eastern Conference standings following a 3-2 shootout win over the Kingston Frontenacs on Sunday afternoon.

The win gives the Generals 87 points with a 41-17-0-5 record securing home ice advantage through the first three rounds of the 2014 OHL Playoffs.

The Generals also locked up the Leyden Trophy representing the OHL’s East Division crown for the fourth time in franchise history and for the first time since the 1990-91 season.  The club also earned division titles in 1990 and 1987 before winning the OHL Championship both years.

The Leyden Trophy was first presented in the 1975-76 season when the OHL was split into divisions with the expansion of the League to 12 teams. The award originated in recognition of Matt Leyden for his contribution to Junior hockey in Ontario.

On Sunday, Vancouver Canucks prospect Cole Cassels scored in the sixth round of the shootout to lead the Generals to victory.  Sam Harding and Michael Dal Colle picked up goals in regulation, and Daniel Altshuller made 33 saves in the win.

The Frontenacs remain the Generals’ closest competitor with 73 points through 61 games and can still reach 87 points however the Generals lead the season series 5-2-0-0.