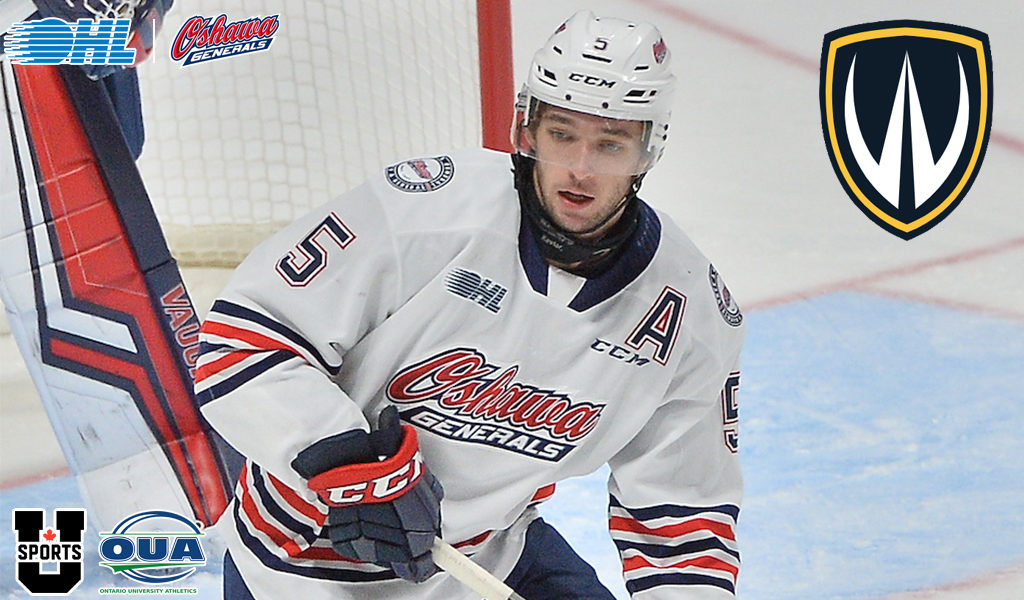 The University of Windsor Lancers men’s hockey program announced via Twitter (@WindsorLancers) on Thursday that Oshawa Generals overage graduate William Ennis has committed for the 2021-22 season.

Widely considered by many in the OHL as a premier “shut down” defenseman, Ennis spent his entire junior career with the Oshawa Generals. He captured the team’s top defenseman award during the 2018-19 season and was a finalist for the OHL’s Roger Neilson Memorial Award presented to the league’s top academic post-secondary player of the year in 2019-20.

“Will gives our blue line added strength in all areas. He has the ability to shutdown the leagues’ top players and yet is able to jump up on offense when he needs to,” commented Hamlin. “I am really proud that he has chosen Windsor as his school. He is very analytical and took his time to finally commit. I could not be happier with our incoming class and the returning Lancers together should create an exciting future for Lancer Hockey.”

The four-time Generals’ Scholastic Player of the Year (2016-20), and two-time team fitness award winner (2017-18 & 2019-20), Ennis is highly regarded by the Oshawa Generals. “Coach Hamlin and his staff have recruited one of the best people I have been around in the OHL,” said Oshawa general manager Roger Hunt. “Will embraces the defensive side of the game, will become a first over the boards penalty kill guy, and will become part of the Lancers’ leadership group.”

Ennis will study for his Bachelor of Mechanical Engineering (Co-op) starting in September.

“Coach Hamlin and his staff have been responsive to my inquires and are clearly focussed on my future success, both as an athlete and as a student,” said Ennis. “Windsor is the best location for the combination of high quality studies and high quality hockey that I am looking for and I hope to contribute to this winning program through my solid play in the backend.”

Ennis and Kohn briefly played together with the Generals during the 2016-17 season. Ennis will also be reunited with former Generals teammate, current Lancer Anthony Salinitri. “After a year at home, I am excited about a hockey life of normality where I am back on the ice and in the locker room with the guys,” said Ennis. “There’s a number of ex-teammates and new teammates that I am looking forward to connecting with.”

Former Generals forward Mason Kohn, who played five OHL seasons between Kitchener, Oshawa, and Saginaw from 2013-18 also joins Ennis in heading to Windsor for the 2021-22 season.

For more information on the Lancer men’s hockey team and the 2021-22 season, stay tuned to goLancers.ca as information becomes available. Be sure to follow them on social media @WindsorMHKY.