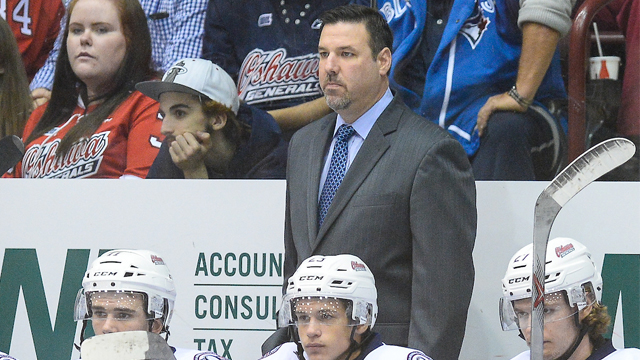 The win halted the Attack’s six game winning streak as sophomore forward Kyle MacLean scored his second shootout winner in as many nights while veteran netminder Jeremy Brodeur made 53 saves.

The Generals, who secured their seventh consecutive trip to the OHL Playoffs in Jones’ 100th win, are neck-and-neck with the rival Peterborough Petes atop the East Division with a record of 34-17-3-2 over 56 games.

After five seasons of pro hockey, Jones stepped behind the bench as an assistant coach in the OHL with Sault Ste. Marie, Brampton, Toronto, Sudbury and Windsor from 1995-2010, winning back-to-back Mastercard Memorial Cup championships with the Spitfires in 2009 and 2010.

Jones served as head coach in Windsor during the 2010-11 season before taking on associate coaching duties with the Spitfires alongside Bob Boughner from 2011-15.

Now in his second season since taking over for D.J. Smith as head coach of the Generals, Jones boasts an overall OHL head coaching record of 100-73-19 over 192 regular season games.

The Generals continue their pursuit of an East Division title this weekend with a three-in-three set featuring a road game on Friday in Ottawa before returning home to face Kitchener and Peterborough on Saturday and Sunday.