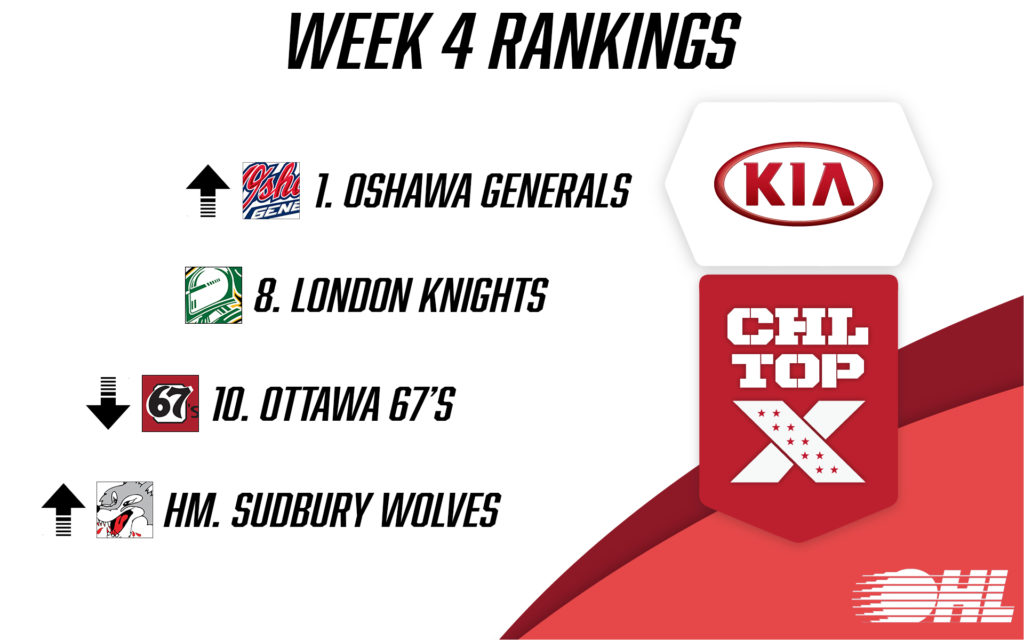 Toronto, ON – The Canadian Hockey League today announced the week four edition of the Kia CHL Top-10 Rankings for the 2019-20 season.  The weekly rankings of the CHL’s Top-10 teams are selected by a panel of National Hockey League scouts.

The Oshawa Generals are the new number one team in the Canadian Hockey League this week, standing alone as the only undefeated team remaining. The 7-0 Generals got a boost last weekend with the return of Florida Panthers prospect Serron Noel along with overage captain Kyle MacLean. Recently acquired netminder Andrew MacLean is 6-0 since joining the Generals. He was in goal for two of Oshawa’s three wins last weekend as they defeated the North Bay Battalion, Hamilton Bulldogs and Saginaw Spirit.

The Ottawa 67’s dropped nine spots down to tenth on the list after owning top spot in weeks two and three. Ottawa had a challenging weekend on the road, defeating the Windsor Spitfires 5-4 in overtime before falling to both London and Kitchener. New Jersey Devils prospect Mitchell Hoelscher leads Ottawa offensively with nine points (4-5–9) through seven games.

Winners of five straight, the Sudbury Wolves received an honourable mention after defeating both Peterborough and Sault Ste. Marie. Top 2020 NHL Draft prospect Quinton Byfield continues to lead the OHL in scoring with 16 points (7-9–6) while overage veteran David Levin had a solid week, putting up seven points (1-6–7) over the two victories.