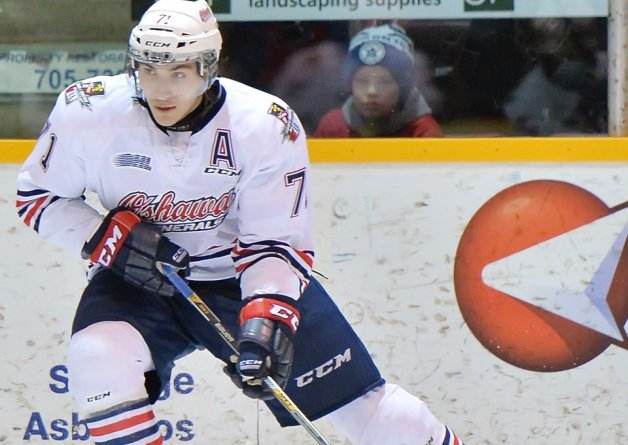 Toronto, ON – The Ontario Hockey League today announced that New York Islanders prospect Michael Dal Colle of the Oshawa Generals is the Pioneer Energy OHL Player of the Week for the playoff week ending April 19 after leading the league with seven points in three games scoring two goals and five assists with a plus-minus rating of plus-1.

Dal Colle moved into second place in the OHL playoff scoring race and helped the Generals advance to the Eastern Conference Championship Series with a 4-1 series win over the Niagara IceDogs.  After falling to the IceDogs by a 7-3 score in Game 3 of the series on Tuesday, the Generals responded with a big 7-4 win on Thursday on the strength of a five-point performance by Dal Colle who assisted on the game’s first three goals then scored a pair of his own earning first star honours in the victory.  Leading the series 3-1 heading into Game 5 on Friday night, Dal Colle contributed two assists for the Generals as part of their 4-2 victory over the IceDogs.  The Generals will now face the North Bay Battalion for the Bobby Orr Trophy in a rematch of the 2014 OHL Eastern Conference Final beginning Friday night in Oshawa.

Dal Colle, an 18-year-old from Woodbridge, ON, is playing in his third career OHL season with the Generals.  A first round pick of the club in the 2012 OHL Priority Selection, Dal Colle was chosen fifth overall by the Islanders in the 2014 NHL Draft.  Through 10 playoff games he has six goals and 15 assists for 21 points after finishing 12th in league scoring during the regular season with 93 points in 56 games including a career-high 42 goals.

Watch video highlights of Dal Colle and the Generals against the IceDogs in Game 4 and Game 5 of the Eastern Conference Semi-Finals.

Also considered for the award this week was fellow General and Vancouver Canucks prospect Cole Cassels who scored four goals and two assists for six points in three games, and Columbus Blue Jackets prospect Nick Moutrey who scored three goals and three assists for six points for the North Bay Battalion in their final three wins against the Barrie Colts.  In goal, the Battalion’s Jake Smith went 3-0-0-0 with a goals-against-average of 2.94 and save percentage of .861.