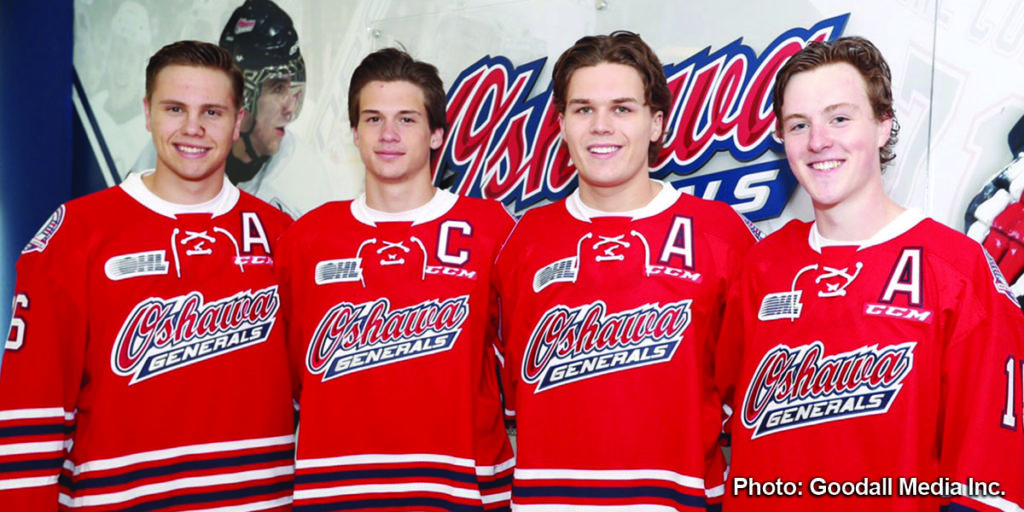 Oshawa, ON- The Oshawa Generals are excited to announce the leadership team for the 2017-2018 season. Jack Studnicka will captain the Generals, with Riley Stillman, Matt Brassard and Kyle MacLean appointed as assistant captains.

On the new leadership team, Coach Greg Nemisz said, “We are really fortunate to have an abundance of character in our dressing room. Jack, Riley, Matt and Kyle are all outstanding young men with bright futures in this game. Jack Studnicka exemplifies what it means to be a General on and off the ice. His passion for the game, care for his teammates and desire to win are traits that have made his personality infectious amongst our group.”

Studnicka recorded 18 goals, 34 assists for 52 points in 64 games with Oshawa in his sophomore season. He led the Generals in their playoff run recording a total of five goals, 12 assists for 17 points in 11 games played. At the team’s award banquet following last season, he was awarded the Red Tilson Community Service award for his dedication to giving back to the Durham Region. In the off season, Studnicka was Boston’s 2nd round, 53rd overall pick in the 2017 NHL Draft.

“It is a huge honour to be named captain of the Oshawa Generals. When you look at the names that have worn the ‘C’ before me, it’s pretty special to be in the same group as them. I love the group we have in the room and I am excited to win with them” said Studnicka after being given the honour.

“Being a captain of the Generals is an honour and responsibility. All of the attributes we are looking for in our next captain are possessed by Jack Studnicka” said Vice President and General Manager, Roger Hunt. “No captain can do the job on his own. Jack will be surrounded by three great assistant captains, and our leadership group outside of these four has continued to grow over the last few years. These players are fully invested in the Oshawa Generals.”