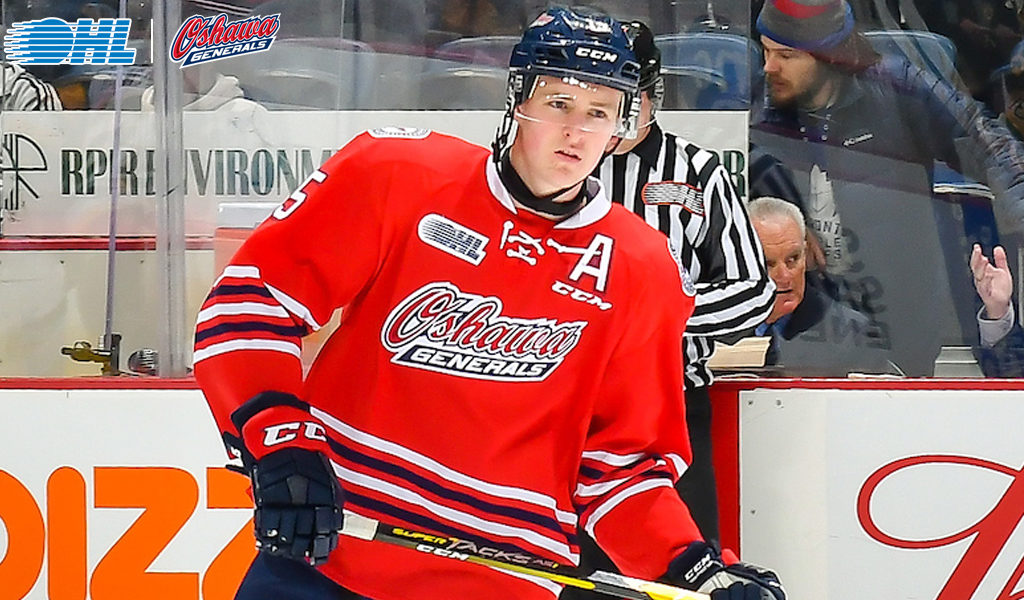 Oshawa, ON – The Oshawa Generals announced today they have named Kyle MacLean captain of the team. He will replace recently traded Jack Studnicka as the new team leader.

“It’s never easy to trade your captain part way through the season, but we know Kyle is ready to immediately take on the role, as he already is a leader in our dressing room,” said Vice President and General Manager, Roger Hunt of the team’s decision.

“Kyle was the logical choice as the next guy to lead our organization,” said Head Coach Greg Walters upon making the announcement. “He defines what the organization is all about and what we stand for. He is the hardest working guy on and off the ice, he never quits, he plays for his teammates before himself and will put his individual success aside for a team win. When we as a coaching staff go into the room with a message, he is always one of the guys following what we are saying and leading by example.”

Drafted in the fourth round (78th overall) in the 2015 OHL Priority Selection, MacLean is in his fourth season with the Generals. This season he has already surpassed his point totals from previous years, and continues to impress as the season progresses. He is the Heart of a General Award winner from last season’s team awards banquet for demonstrating leadership on and off the ice and the sportsmanship he continuously displays. This past summer, he attended the New York Islanders Rookie and Main Camp leading into the Generals season.

Previously an assistant captain, MacLean will now step into his new role as the team leader. “It’s a tremendous honour to be named captain of the Oshawa Generals,” said MacLean after the coaching staff told the team the news. “Obviously, it’s a very storied franchise in our league and there has been some great captains in the past so for this honour to be bestowed upon me, it’s very humbling.”

MacLean has family ties to the area. His father, former NHL player and current NHL assistant coach John MacLean, is an Oshawa native and former Oshawa General himself. His grandparents, who currently reside in Oshawa, are long time season ticket holders of the team.