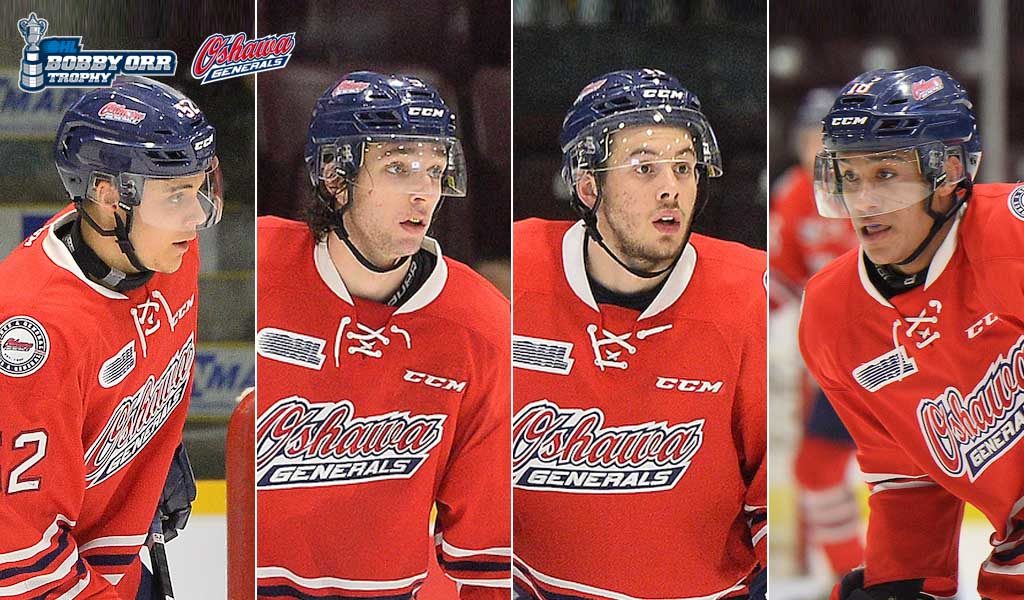 The Oshawa Generals have come back from down 2-0 once in these playoffs and now they’re tasked with climbing out of a 3-0 hole against the first place team in the Ontario Hockey League.

The Ottawa-based quartet is joined by two other players that have been in and out of the Generals playoff lineup in 19-year-old defender Matthieu Franche (Orleans, Ont.) and 17-year-old winger Danyk Drouin (Casselman, Ont.).

“I’ve been on different teams and I’ve never had more than a couple guys from Ottawa with me, so to have six has been really cool,” said the well-traveled Mattinen who hoisted the Robertson Cup as a member of the London Knights in 2016 and again last spring with the Hamilton Bulldogs. “There’s definitely a lot you have in common just by virtue of growing up in the same region. We’ve shared a lot of laughs this year and it’s been a lot of fun.”

The overage Mattinen is two years older than the other three Ottawa regulars in the Generals lineup, a trio that shared many a minor hockey battle coming up through the ranks.

“Giovanni and I played together for three years with the Jr. 67’s and we were actually defence partners,” said Ennis, an unheralded shutdown defender in his third year with the club. “We always had a good connection growing up and so it’s kind of cool how it’s all worked out with him coming to Oshawa and us playing together again.

“Serron on the other hand I grew up playing against,” Ennis added. “He played for the Senators and like a lot of defencemen in our league feel today, you were never too excited to go into the corner with him. I’m happy to have him on the same team now,” he laughed.

“The games didn’t go our way, but it was cool to see the amount of fans that came out to support them in Games 1 and 2,” said Mattinen. “I haven’t seen that kind of support for the 67’s since I was 10 or 11 years-old.”

“I had a good time as a kid watching Logan Couture, Jamie McGinn, and Petr Mrazek play in that building. I just remember seeing how big and fast they all were and it definitely inspired my love for the game.”

After a disappointing 5-1 loss at home in Game 3, the Generals are back on home ice tonight looking to stave off elimination and hand the 67’s their first loss of the postseason. The Gennies have yet to put together a solid 60 minutes in the series, something they’re looking to change in Game 4 but will have to do so without the services of veteran winger Anthony Salinitri who is serving the first of a six-game suspension.

“We got down against Niagara and managed to turn things around,” said Ennis of the situation. “It’s a mental game. We definitely had promising moments in both Games 1 and 2. Now we just need to put it all together and push back on these guys.”

Catch Game 4 of the 2019 Eastern Conference Championship Series tonight at 7:05pm at OHLLIVE.com.