Generals’ Walker commits to Waterloo for 2020-21 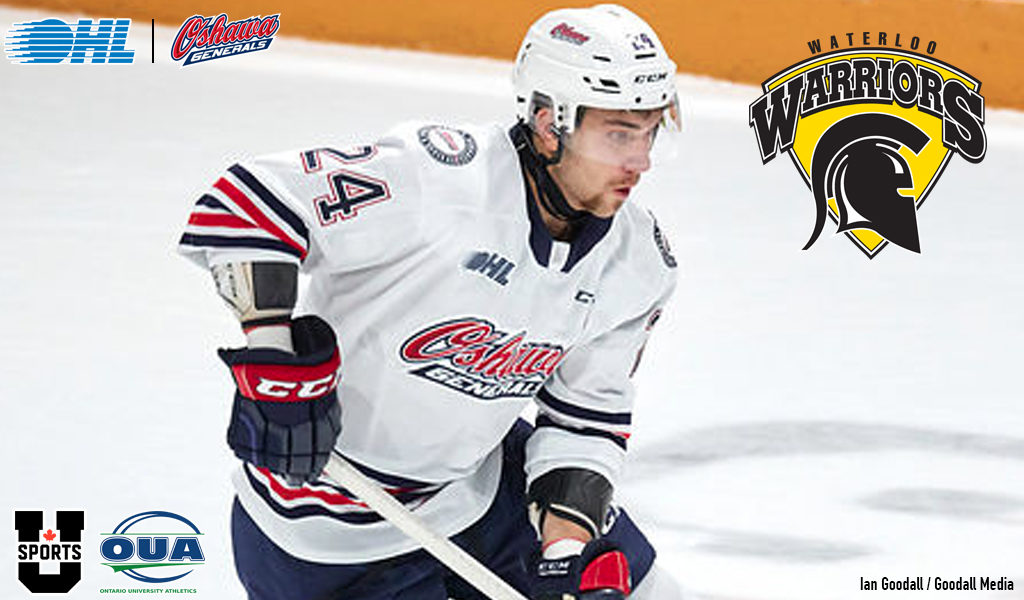 From University of Waterloo Athletics

Reputationally, Daniel Walker is one of the toughest and most-respected competitors in the Ontario Hockey League. So it only makes sense that he’ll now be wearing the Warriors shield.

Walker, a Sudbury native and veteran OHL forward, has committed to the Warriors men’s hockey program beginning with the 2020-21 season. And after his final junior season was cut short due to injury, Walker is more than ready to jump into the next chapter of his hockey career.

“I’m working out already,” said Walker, who suffered a shoulder injury on December 13. “I’m healed up now, and I’ll be coming into the season fully healthy and ready to go.”

Walker played just 18 games in his overage season with the Oshawa Generals before the injury sidelined him. Before that, he played three seasons with the North Bay Battalion, where he earned his reputation as one of the hardest players to face in the league. All told, Walker put up 16 goals and 15 assists for 31 points in 153 OHL games, while amassing 303 penalty minutes in an enforcer role.

But the hulking 6’5″, 212-lb forward can do much more than just police the ice. Warriors head coach Brian Bourque thinks that Walker can be effective at both ends of the ice, and has some previously-untapped potential.

“His skillset is higher than what you might think, if you just look at his penalty minute totals,” said Bourque. “He can come to our level, and the expectation is that he will contribute in other ways.”

Off the ice, Walker is a strong student and a respected teammate, which helped Bourque immensely in the recruiting process – especially since he didn’t get a chance to see Walker play live before his season ended prematurely.

“We watched film on him, and then we talked to management staffs in both Oshawa and North Bay. They talked about his personality traits and work ethic, and just raved about him.”

“The main thing is that it’s a great academic school, but the atmosphere is great,” added Walker. “I think I’m a good off-ice guy, and a team-first guy, and that seems to be who the whole team is. I think I have some speed, and can do some of the dirty things – block shots, and make hits. I’m excited to get back on the ice.”

Walker will join his new club for training camp in September, before the OUA regular season kicks off in early October.