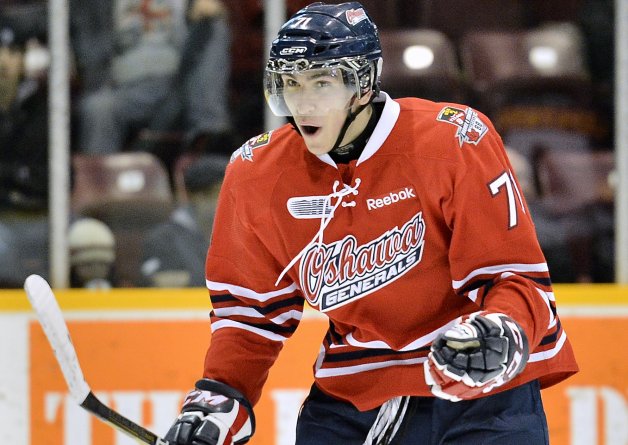 Toronto, ON – The Ontario Hockey League today announced that forward Michael Dal Colle of the Oshawa Generals is the OHL Player of the Week for the first week of the 2013-14 OHL regular season, ending September 22, after scoring four goals and three assists for seven points in two games.

Dal Colle led the Generals to a pair of victories and was twice named first star of the game to open the new campaign.  He scored twice including the league’s first goal of the season on opening night against the Windsor Spitfires, and also picked up two assists including a setup of Hunter Smith’s third period game-winner that lifted the Gennies to a 4-3 win.  On Friday night Dal Colle and the Generals continued their West Division road trip against the Sarnia Sting where the 2014 NHL Draft prospect scored another two goals and picked up one assist in the 5-4 victory.

Dal Colle, a 17-year-old from Woodbridge, ON, is playing in his second OHL season.  Originally selected seventh overall by the Generals in the 2012 OHL Priority Selection, Dal Colle collected 15 goals and 33 assists for 48 points in 63 games last season while earning a spot on the OHL’s First All-Rookie Team.  Eligible for the 2014 NHL Draft, Dal Colle has been listed as an ‘A Skater’ by NHL Central Scouting in their Preliminary Players to Watch List for this season.

Click here for Dal Colle’s highlights against the Spitfires on Friday night.

Click here for Dal Colle’s highlights against the Sting on Saturday night.

Also considered for the award this week was Darcy Greenaway who scored five goals between a pair of victories for the Kingston Frontenacs over the Peterborough Petes and the North Bay Battalion, and Jared McCann of the Sault Ste. Marie Greyhounds who scored four goals as part of a 10-3 win over the Sudbury Wolves on Saturday night.