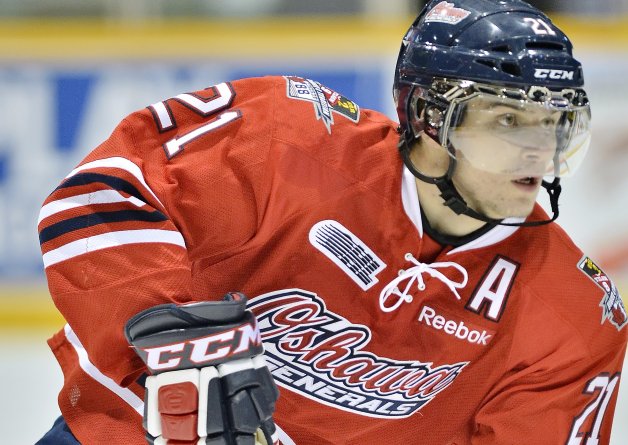 Toronto, ON – The Ontario Hockey League today announced that Philadelphia Flyers prospect Scott Laughton of the Oshawa Generals is the OHL Player of the Week for the week ending October 6 after leading the league with nine points in three games scoring three goals with six assists and a plus-minus rating of plus-1.

Laughton returned from the Flyers this week and contributed immediately to the Generals’ who picked up three wins in three games.  He also becomes the second member of his club to win the award in three weeks following 2014 NHL Draft prospect Michael Dal Colle in Opening Week.  On Thursday night in his first game back with the club, Laughton scored twice and added two assists claiming first star honours in a big 7-1 win over East Division rivals the Peterborough Petes.  One night later the Gennies hosted the Bulls in another East Division clash with Laughton collecting two assists as part of the 3-2 win.  His week wrapped up on Sunday night with another multi-point game scoring once with two assists as first star of a 4-1 win over the Guelph Storm.

Laughton, a 19-year-old from Oakville, ON, is playing in his fourth OHL season with the Generals.  The third overall pick in the 2010 OHL Priority Selection, Laughton then became a first round pick of the Flyers in 2012 chosen 20th overall and appeared in five NHL games last season.  In 49 games with the Generals in 2012-13, he set career-high numbers with 23 goals and 56 points in 49 games.

Also considered for the award this week was Buffalo Sabres prospect Nicholas Baptiste of the Sudbury Wolves, and Tampa Bay Lightning prospect Henri Ikonen of the Kingston Frontenacs.  Both players posted seven points this past week with Baptiste tallying four goals and three assists in two games, while Ikonen scored twice with five assists in three games.  In goal, 17-year-old rookie Brandon Halverson of the Sault Ste. Marie Greyhounds earned a 32-save shutout victory in his first career OHL start Saturday night in a 4-0 win over the Belleville Bulls.