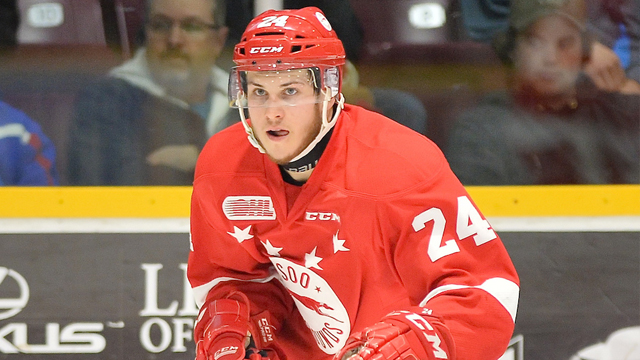 Toronto, ON – The Canadian Hockey League today announced that Bobby MacIntyre of the Sault Ste. Marie Greyhounds is the CHL Player of the Week for the week ending October 30 after scoring two goals and five assists for seven points in three games with a plus-minus rating of plus-4.

MacIntyre extended his point-streak to nine games last week as the Greyhounds picked up four of a possible six points in three road contests.  On Thursday night he recorded two assists in a 5-2 loss to the Windsor Spitfires, then tallied an assist on Friday in a 4-3 overtime win against the London Knights.  His week wrapped up Sunday with a four-point performance scoring twice with two assists as first star of a 5-2 win over the Guelph Storm.

A 20-year-old from Oshawa, ON, MacIntyre is playing in his fifth career OHL season and second with the Greyhounds after playing his first three seasons with the Mississauga Steelheads.  He is currently tied for second in OHL scoring with eight goals and 19 assists for 27 points in 16 games.