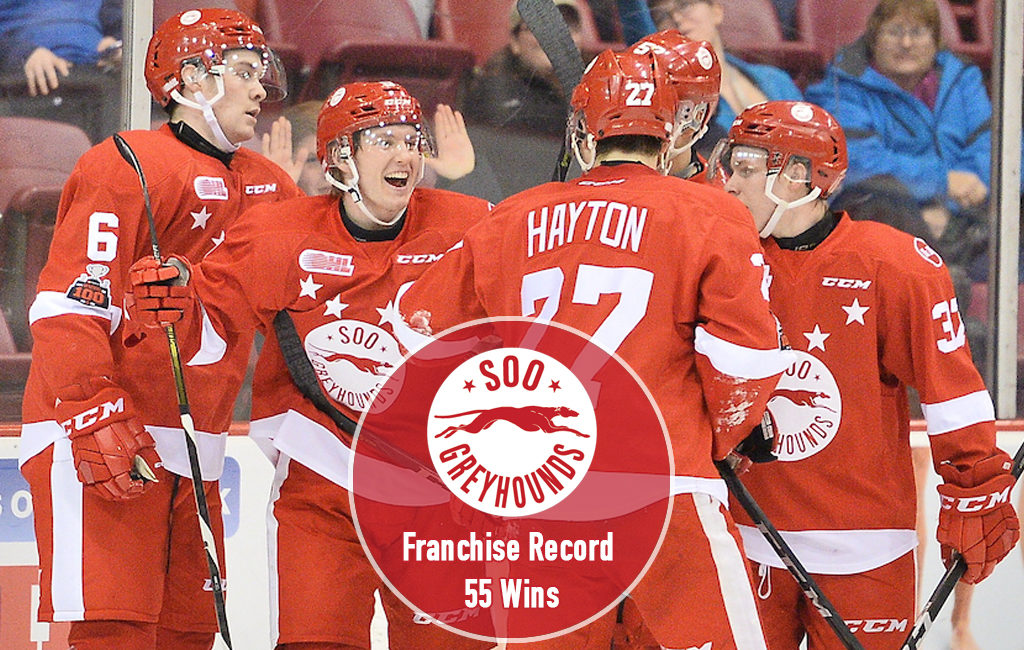 The 2017-18 OHL regular season officially concluded as the most successful in Sault Ste. Marie Greyhounds franchise history on Sunday.

The Hounds defeated the visiting London Knights 6-3 to win a franchise record 55th game of the season, finishing with a CHL-best 116 points to earn the Hamilton Spectator Trophy as OHL regular season champions for the fifth time.

The 55 wins surpass prior franchise records set by the club recently in 2014-15 as well as during the 1984-85 season before the Greyhounds went on to win an OHL championship.

The 55-7-3-3 Greyhounds scored a league-leading 317 goals while surrendering a league-low 186. Other highlights included a franchise record 23-game winning streak from Oct. 28 to Dec. 30th along with a run of 29 consecutive contests undefeated in regulation. The Hounds also went on a 27-game home winning streak from Oct. 20th to Mar. 14th, a mark that stands as the second-longest in OHL history following the club’s undefeated season at home in 1984-85.

Morgan Frost and Boris Katchouk (42 goals each) give the Greyhounds two 40-goal scorers in their lineup for the first time since 1996-97 when the trio of Joe Seroski (54), Richard Uniacke (44) and Joe Thornton (41) reached the mark. Frost and Katchouk both passed the 200-point mark on their OHL careers this past weekend. Additionally, Frost’s league-leading plus-70 rating is the highest the OHL has seen since London’s Danny Syvret posted an identical figure in 2004-05.

Despite missing time to a combination of winning gold with Canada at the World Juniors along with being sidelined by injury, Colorado Avalanche prospect Conor Timmins recorded over a point-per-game from the back end, finishing the season with 41 points (8-33–41) over 36 games. Veteran Mac Hollowell led the Greyhounds in offence from the blue line with his 56 points (12-44–56).

The Hounds are off to the OHL Playoffs where they’ll face the Saginaw Spirit in first round action as they pursue their first OHL championship since 1992 and first Mastercard Memorial Cup crown since 1993.