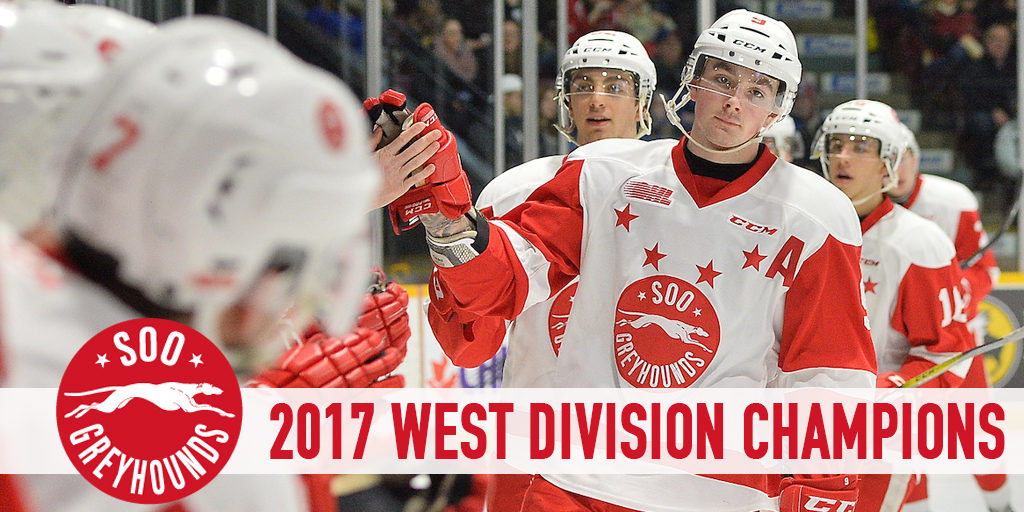 The Sault Ste. Marie Greyhounds are West Division champs for the third time in the past four seasons, claiming the crown with a commanding 6-1 home ice win over the Kitchener Rangers on Friday.

Rookie netminder Matthew Villalta made a season-high 40 saves, improving to 24-2-0-0 on the campaign while Tampa Bay Lightning prospect Boris Katchouk (31, 32) led the way offensively with a pair of goals for the Hounds’ fourth straight win.

The 45-15-3-1 Greyhounds have breached the 90-point plateau for the third time in the last four seasons as they continue in pursuit of the franchise’s first Mastercard Memorial Cup title since 1993. The memorable run has seen standout talent in Jared McCann (Florida Panthers), Darnell Nurse (Edmonton Oilers) and Matt Murray (Pittsburgh Penguins) wear the red and white along with other stars in Sergey Tolchinsky, Anthony DeAngelo, Zach Senyshyn, Blake Speers and several others.

Friday’s win gives the Greyhounds their sixth Bumbacco Trophy in franchise history, a distinction that was inaugurated prior to the 1994-95 season when the league was realigned into three divisions. The award is named after former Greyhounds’ General Manager Angelo Bumbacco who was one of the original founders of the franchise. In addition to winning 2014 and 2015 West Division titles, the Hounds also did so in 1997, 2005 and 2008.

Prior to realignment, the Greyhounds earned the Leyden Trophy in 1981 as well as the Emms Trophy for Division titles in 1983 and 1985 prior to a memorable three year run. With teams that included eventual NHL talent in Adam Foote, Bob Boughner, Steve Sullivan and Aaron Gavey, the Hounds won Division titles from 1991-93.

After winning OHL Championships in 1991 and 1992, the Hounds lost to the Peterborough Petes in the 1993 OHL Championship before defeating them to win the lone Memorial Cup title in franchise history as tournament hosts.