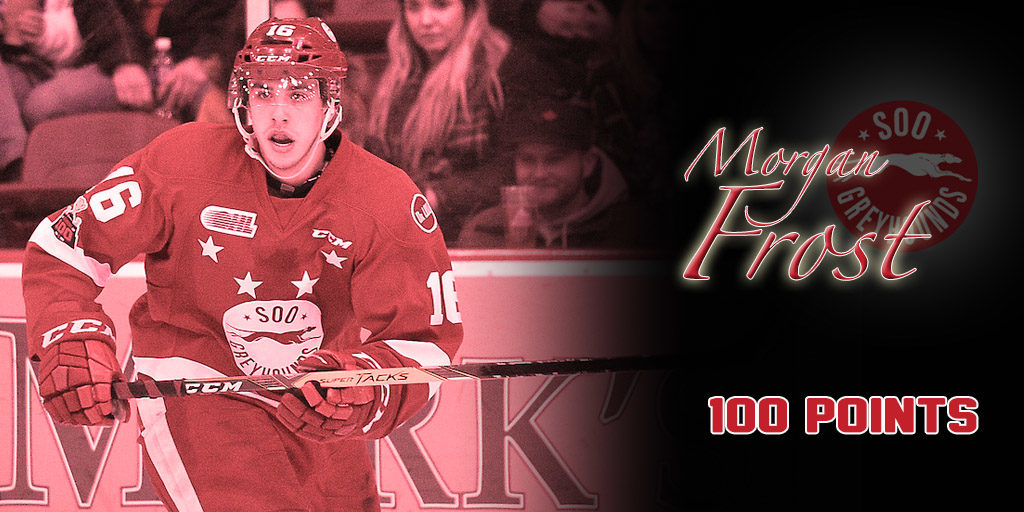 Sault Ste. Marie Greyhounds forward Morgan Frost‘s 38th goal of the season on Friday was his 100th point as he opened the scoring in a 6-5 shootout win over the visiting Sarnia Sting.

Frost reached the century mark in his 60th game, giving him a total of 38 goals, 62 assists and 100 points to go with a league-leading plus-61 rating.

A first round pick of the Philadelphia Flyers last spring, Frost joins Nick Cousins (2012-13) as just the second Greyhound in the past 20 years to record 100 points in a season. Prior to that span the club had three players (Joe Thornton, Richard Uniacke, Joe Seroski) reach triple digits during the 1996-97 season while a few other prominent 100-point names from a rich franchise history include Wayne Gretzky (1977-78), Wayne Groulx (1982-85), Rick Tocchet (1983-84) and Steve Sullivan (1993-94).

WATCH THIS: @_morganfrost_10 💯@NHLFlyers prospect joins the #OHL century club with his 3️⃣8️⃣🚨 of the season for @OHLHoundPower. pic.twitter.com/XEjlUOYCNm

Originally a fourth round pick by the Greyhounds from the Barrie Colts Minor Midgets in the 2014 OHL Priority Selection, Frost leads the league’s number one offence in scoring, recently helping the Hounds capture the Hamilton Spectator Trophy as OHL regular season champions.