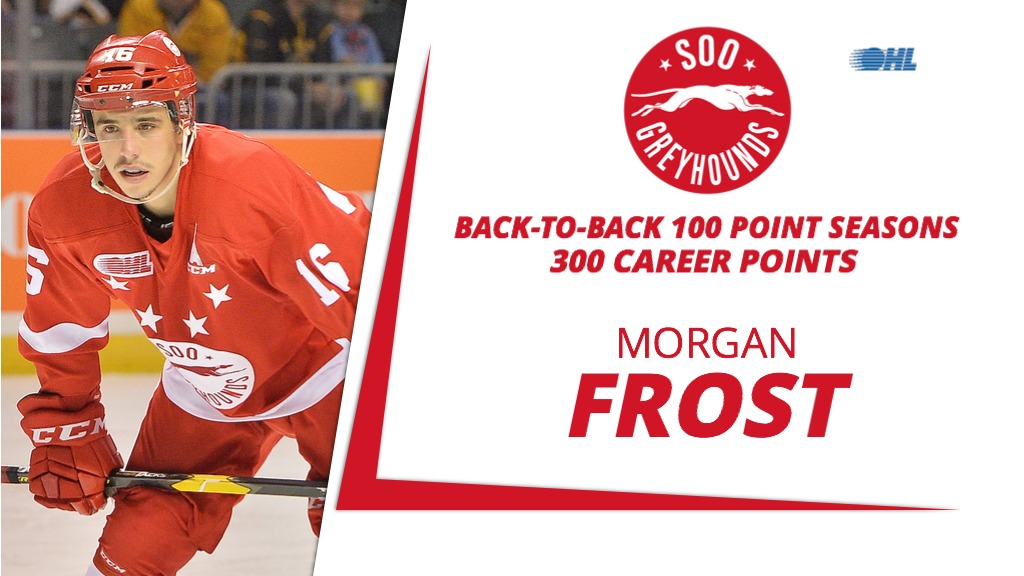 The Soo Greyhounds may have come up short, but Morgan Frost had a big night at the Aud on Friday.

The Philadelphia Flyers first round pick picked up a pair of primary assists in a 4-3 loss to the Kitchener Rangers, becoming the first OHL player to eclipse the 100-point mark this season while also reaching the 300-point plateau on his OHL career.

Frost’s 100 points lead the league, a figure that includes 38 goals and 64 assists over 51 games to go with a plus-30 plus/minus rating.  The 19-year-old from Aurora, Ont. is in the midst of a 10-game point streak for the West Division leading Greyhounds who own a 38-13-6-1 record on the season.

What took Frost 60 games to accomplish last season was done in just 51 in 2018-19 as he becomes the first Hounds player since Richard Uniacke (1996, 1997) to post back-to-back 100 point campaigns. Frost, Uniacke, Wayne Groulx (three times), John Goodwin and Cary Farelli are the only players in franchise history to record 100 points in more than one season.

Over his 250 game regular season OHL career, Frost has 105 goals, 196 assists and 301 points, the sixth-most in franchise history. He finished fourth in 2018 OHL Playoff scoring with 29 points (10-19–29) over 24 games, helping the Greyhounds win their first Western Conference Championship since 1993.

A graduate of the Barrie Jr. Colts Minor Midget program, Frost was Sault Ste. Marie’s fourth round pick in the 2015 OHL Priority Selection. His accomplished career featured OHL First All-Star Team recognition last season after he was a first round (27th overall) pick of the Philadelphia Flyers in the 2017 NHL Draft.

Frost represented Canada at the 2019 IIHF World Junior Hockey Championship this past January, leading his country in scoring with eight points (4-4–8) over five games in Vancouver, BC.