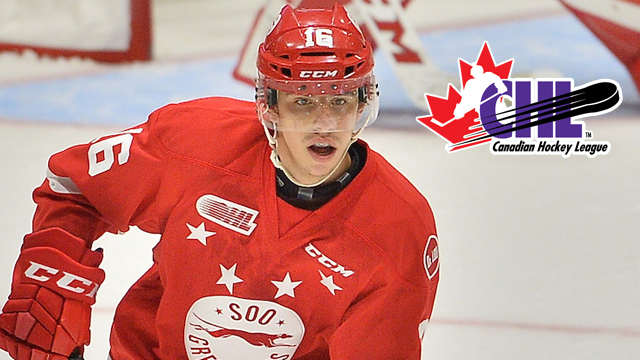 Toronto, ON – The Canadian Hockey League today announced that Philadelphia Flyers prospect Morgan Frost of the Sault Ste. Marie Greyhounds is the CHL Player of the Week for the week ending December 17 after scoring four goals and four assists for eight points in three games with a plus-minus rating of plus-9.

Frost extended his personal point-streak to 11 with a trio of multi-point performances last week that helped the top ranked Greyhounds wrap up the first half of the 2017-18 season riding a 20-game winning-streak.  He earned first star honours on Wednesday with two goals in a 4-1 win over the Flint Firebirds, then notched two assists on Friday in a 4-3 victory against the Kitchener Rangers.  His top performance came Saturday in Guelph with his second four-point effort of the season with two goals and two assists as second star of a 7-1 win over the Storm.

An 18-year-old from Aurora, Ont., Frost is playing in his third season with the Greyhounds who chose him in the fourth round of the 2015 OHL Priority Selection.  Frost ranks third in OHL scoring with 19 goals and 36 assists for 55 points in 33 games and carries a plus-minus rating of plus-42 which is highest in the entire CHL.  He was selected in the first round, 27th overall, by the Flyers in the 2017 NHL Draft and was signed to an entry-level contract in August.

Also considered for the award this week was Nolan Volcan of the Seattle Thunderbirds with two goals and five assists for seven points in two games, and Rémy Anglehart of the Blainville-Boisbriand Armada who scored five goals in two games.