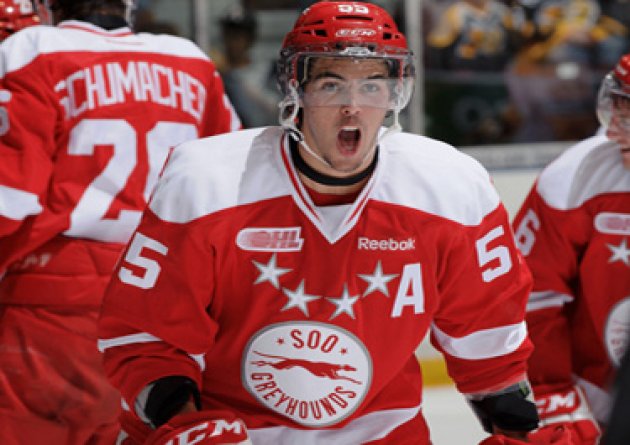 Toronto, ON – The Ontario Hockey League today announced that defenceman Ryan Sproul of the Sault Ste. Marie Greyhounds is the OHL Player of the Week for the week ending February 3 after scoring three goals and three assists for six points in two games with a plus-minus rating of plus-1.

Sproul helped the Greyhounds earn two big comeback wins on the road against tough West Division opponents in Plymouth and Saginaw.  On Friday night he recorded a career-high five points with two goals and three assists as first star of a 6-5 win over the Whalers.  Trailing 2-0 early in the first period, Sproul’s 15th goal of the season put the Hounds on the board at the 11:04 mark.  He later added goal number 16 on the power play at 19:37 of the second period which gave the Hounds a 4-3 lead, before setting up Andrew Fritsch for his 17th of the season at 17:20 of the third period which held as the game-winner.  On Saturday night Sproul’s third period goal was the Hounds’ third unanswered coming back to tie the score 3-3 in a game they went on to win 5-4 in a shootout over the Spirit with Sproul claiming third star honours.

Sproul, a 20-year-old from Mississauga, ON, is playing in his third OHL season with the Greyhounds.  Selected in the second round of the 2011 NHL Draft by the Detroit Red Wings, Sproul is now tied for first among OHL defencemen in scoring with 47 points including 17 goals and 30 assists in just 34 games played.

Also considered for the award this week was fellow Red Wings prospect Alan Quine of the Belleville Bulls who scored two goals and seven assists for nine points in three games, and defenceman Anthony DeAngelo of the Sarnia Sting who scored once with six assists for seven points in three games.  In goal, Matej Machovsky of the Brampton Battalion went 2-0-0-1 with one shutout posting a goals-against-average of 1.30 and save percentage of .953.