Gronvaldt to Represent Denmark for a 3rd time 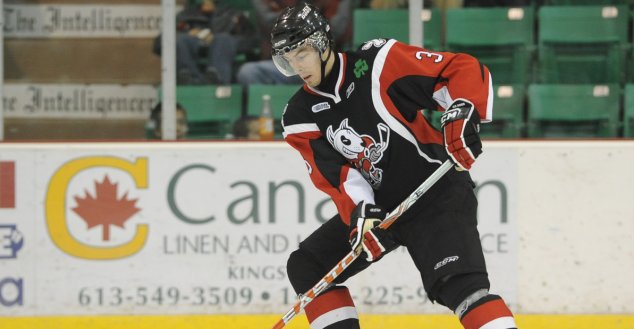 Niagara IceDogs defenceman Simon Gronvaldt has been named to Team Denmark for the IIHF World Juniors Division I – Group B tournament taking place in Slovenia next month.  Gronvaldt and the Danes will be grouped in with Austria, Croatia, Kazakhstan, Lithuania, and Slovenia with the tournament running from December 12th-18th.  The winner of the group will advance to the Top Division for the 2012 World Junior Hockey Championships.

“It’s a great feeling; not a lot of guys get the opportunity to play for their country, and to get a third chance is something I’m very happy about,” says Gronvaldt.

This will be Gronvaldt’s third stint playing with the Danish team during the World Juniors, having played as a 16-year-old as well as last year while he was with the Barrie Colts.  In both his previous trips to the World Juniors, the Danes have finished second in their group with a 4-1 record, narrowly missing the opportunity for promotion to the Top Division.

Although nothing was made official until the last couple of days, Gronvaldt had an idea what to expect when he got the call.

“I kind of knew before because I was talking with the coach and I was at a camp at the beginning of the season,” he explains. “But the coach told me two days ago it was official, and I was excited to hear the news.

“It’s a great honour to play for your country, and it’s a good opportunity for me to play with the boys from back home.”

IceDogs assistant coach and defensive coach Mike Van Ryn believes it will be a great opportunity for Gronvaldt to learn and gain experience.

“Any time a player has a chance to play in an international tournament with the world’s top tier players, it’s a great learning experience,” says Van Ryn. “Obviously just the competition and playing against some talented guys will reflect on his play and hopefully he will bring that experience back to Niagara.”

Gronvaldt will leave Niagara to join the Danish team on December 5th to begin practicing and preparing for the tournament.

“Obviously we will miss him here, he’s been playing great for us as of late,” says Van Ryn. “But it will give him a chance to be with his countrymen and play against some elite players, so we’re happy for him and wish him the best.”

Van Ryn notes that Gronvaldt is a player that has the ability to play in all types of situations, whether it’s in the second defensive pairing on the power play, or on the penalty kill, he is able to play the minutes and adjust to any type of game.

“I want to make some offensive plays while at the same time playing a solid defensive game,” says Gronvaldt. “My coach wants me to move the puck quickly to the offense and Marty and Mike want the same here, so I’m just going to play the same game as I do here in Niagara.”