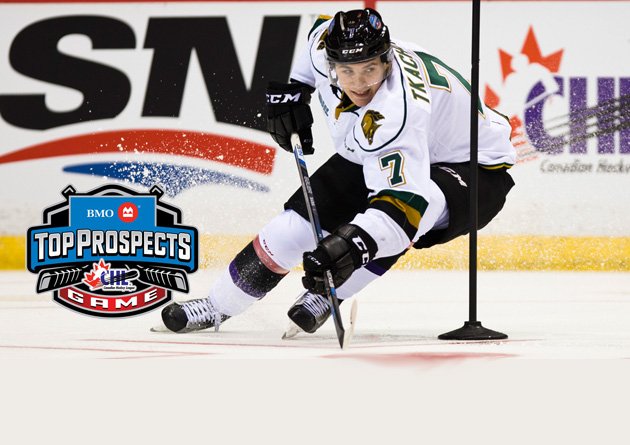 A new face on the Canadian Hockey League scene this season, London Knights forward and top rated North American prospect Matthew Tkachuk has come along and turned heads across the country with his intriguing blend of size, skill, patience and a knack for precision passing.

With a father in the NHL, Tkachuk’s childhood wasn’t an ordinary one. He had the privilege of learning from one of the best.

“Like any dad when you’ve got younger kids you want to teach them all the skills and proper techniques and he did that,” said the younger Tkachuk. “The biggest thing that sticks with me though is that he always said, “compete the hardest and be a great teammate.” I’ve always remembered that and if I want to play in the NHL those two things will have to remain important aspects of my game.”

While Keith Tkachuk finished his NHL career with 538 goals and 527 assists over 1,201 games, Matthew, while boasting similar qualities in terms of his physical play, clearly has different offensive instincts as indicated by his stat line. He’s currently second in the OHL with 54 assists in 37 games.

“I think my dad was more of a bull in a china shop,” he said with a laugh. “He had a quick release. As soon as the puck hit his stick it was gone and that’s what made him such a scoring threat. I’m more of a guy who likes to slow things down a little bit, play to my strengths down low, hold onto the puck for as long as I can and then find that open guy in the slot for a shot.”

“It’s worked out well for me this year.”

Knights teammate Max Jones, who will line up against Tkachuk at the BMO CHL/NHL Top Prospects Game on Thursday, concurs with that assessment.

“He sees the ice really well and has that special ability to set the pace at whatever speed he wants when he has the puck on his stick,” Jones remarked. “He finds creative ways to get his linemates the puck and set them up for success, which makes him a really fun guy to play alongside.”

While not traditionally a hockey hotbed, Tkachuk grew up playing in St. Louis, a city that has turned out other promising young OHL stars in fellow Top Prospect Logan Brown of the Windsor Spitfires and Kitchener Rangers captain Ryan MacInnis.

“There are good things happening there,” noted Tkachuk. “It all starts with the people up top in the St. Louis Blues organization including a lot of former players who have put a lot of time and effort into making the minor hockey system there what it has become today. There’s a lot of expertise there, guys who have played in the NHL and know what the process entails to develop quality hockey players. There’ve been some great guys coming out of there lately and hopefully it can continue to grow.”

Tkachuk got to spend a lot of time with some of the younger Blues players throughout his childhood as father Keith and mother Chantal often served as billets for players breaking into the league with such names as present day St. Louis captain David Backes and veteran New Jersey Devils forward Lee Stempniak stopping through.

“I played a lot of sports with him; we jumped on the trampoline, threw the football and played mini-sticks in the basement,” Stempniak told NHL.com’s Mike Morreale. “I just remember both of Keith’s boys [Matthew and Brady] loving to play hockey. Keith and Chantal did a great job raising their three kids [including daughter Taryn]. They are all so respectful.”

With his childhood years behind him, Tkachuk has big opportunities on the horizon. He and Knights defenceman Olli Juolevi square off against teammate Max Jones and Team Cherry on Thursday, something Tkachuk figures will be an ‘interesting’ experience.

“I’ve played against Max before,” he said with a smile. “He’s not a fun guy to go up against, so it’ll provide a good challenge. Olli’s a guy you don’t mind having in your corner. His performance at the World Juniors this year speaks for itself. I’m looking forward to getting the puck dropped.”

The puck will drop soon enough as the 21st BMO CHL/NHL Top Prospects Game is slated for a 6:00pm PST/9:00pm EST start on Thursday in Vancouver. The game can be seen live across the country on Sportsnet, TVA Sports and in the United States on NHL Network.