Guskov and Petrov ready for the front lines with Troops 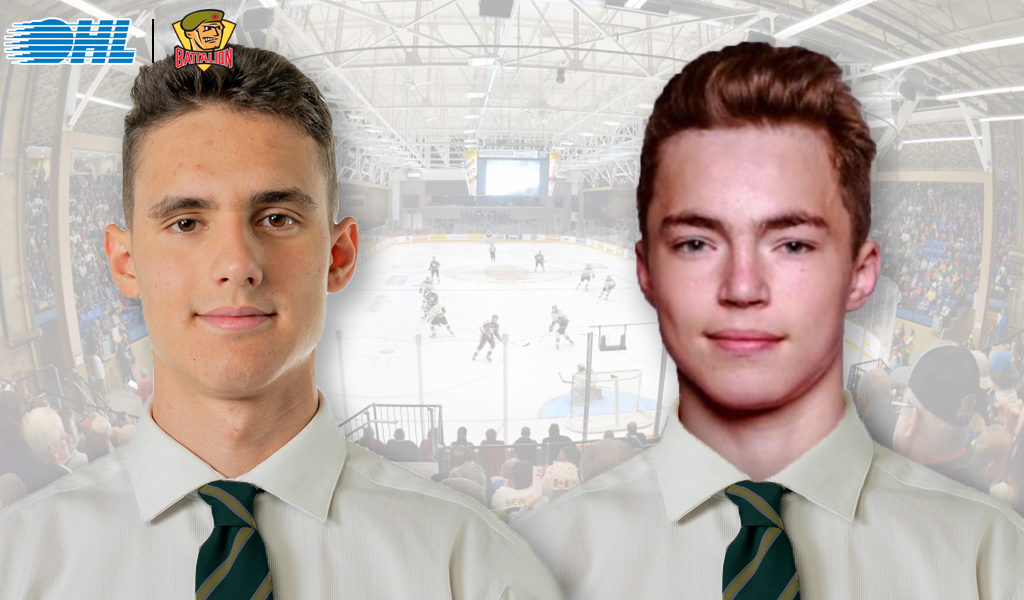 There’s a lot to be excited about in North Bay.

While fans are looking forward to getting familiar with the two new Russian additions, there’s a familiarity that already exists between the two skaters.

A face of the #CHL’s future:

For Battalion general manager Adam Dennis and his associates, that familiarity was key.

“We had a couple conversations with him prior to get comfortable and there was a familiarity with Matvey Guskov so we felt very comfortable with the selection,” Dennis said in a media scrum following the Import Draft on June 30.

Both Guskov and Petrov share the same agent and first spent time together back at the 2019 NHL Draft where Guskov was selected in the fifth round by Minnesota.

“The first time I saw him play, I was impressed, he was two years younger than us but did everything the same,” said Guskov. “I’m really looking forward to next season, to see him help us win.”

Petrov had similar words for his new Russian teammate, calling him a “really skilled player.”

Coming from a London Knights team that has soared atop the Western Conference for the past two seasons, there’s an expectation that Guskov, who put forth 30 points in both of those season, will make an immediate impact on a younger Battalion squad. Together with Petrov, who spent last season with MHK Krylia Sovetov Moscow of Russia’s top junior circuit and earned nine points (5-4—9) over 21 appearances, head coach Ryan Oulahen is confident they have the integral pieces to design a team that will be really difficult to play against next season, which is the identity they’ve been striving to create after finishing the 2019-20 campaign at the bottom of the OHL standings.

“We want to be a really hard team to come in play against, especially at home, and to do that you have to have depth in this league. You really do,” Oulahen said. “Certainly I think there’s going to be a little more flare on the Battalion uniform with these guys coming in.”

Being chosen first overall comes with its element of pressure, said Petrov, but it’s something he’s ready for.

And when it comes to that pressure, Dennis says it’s something that’s earned.

“You want to be in them,” Dennis said. “Mr. Petrov has played internationally and so has Mr. Guskov, they know what the pressure’s all about, they’ve earned it, they’ve been there before so we think they’ll definitely be up to the task.”

Pressures aside, playing in a new country comes with inevitable challenges, including a language barrier, but Oulahen feels assured that having a friend in Guskov will go a long way.

“It’s really going to help having Guskov. We’re hoping it helps expediate the comfort level for him,” said Oulahen. “Having a guy that can navigate things not only on the ice but off the ice, in his routine, getting him acclimated to the city…I think all those things are going to be a huge benefit for him.”

And as for Guskov, he’s looking forward to being that support system for Petrov.

“Of course I’m going to help him. I went through it, it’s pretty hard to come over and play in another country and speak English, but last year I helped Kirill Steklov. I helped him a lot with English, with everything, and I’m going to help Matvei next year.”