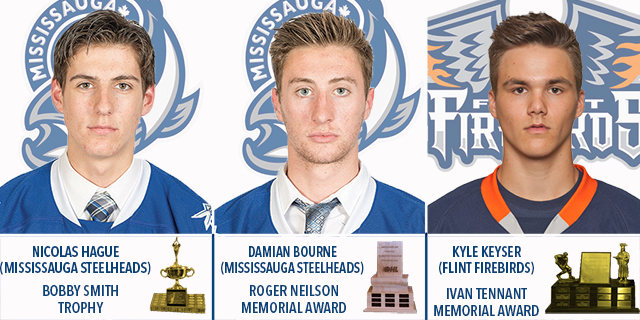 Toronto, ON – The Ontario Hockey League today announced the recipients of the league’s three Academic Player of the Year awards for the 2015-16 season.

All three players will be formally presented with their awards at the annual OHL Awards Ceremony on Tuesday June 7.  Hague will be the OHL’s nominee for CHL Scholastic Player of the Year which will be announced on Saturday May 28 as part of the events at the 2016 MasterCard Memorial Cup in Red Deer.

“I think it is important to balance hockey and school, and I pride myself on making sure I always keep both a priority,” said Hague. “I know that there will always be a life after hockey and I want to make sure I am ready for it. It is a huge honour to be recognized for my work away from the rink.”

On the ice, the 17-year-old from Kitchener, ON, scored 14 goals and 10 assists for 24 points in 66 games played.  Eligible for the 2017 NHL Draft, Hague was named to the OHL’s Second All-Rookie Team and recently represented Canada at the IIHF World Under-18 Championship.

“Nic Hague was an excellent student when he joined our club and has remained an excellent student through his transition into the OHL with the Steelheads,” said James Boyd, Steelheads General Manager and Head Coach. “The Bobby Smith Award is a credit to Nic’s diligent approach to both his studies ‎and hockey.”

Each year the Bobby Smith Trophy is presented to the OHL Scholastic Player of the year who best combines high standards of play and academic excellence.  The trophy is in honour of Bobby Smith, a former Ottawa 67’s star who exhibited a standard of excellence in both of these areas.  First presented in 1980, Hague is the first member of the Steelheads to win the award.  Past winners also include three-time winner Dustin Brown (Guelph 2001-03), Steven Stamkos (Sarnia 2007), Matt Duchene (Brampton 2009), Dougie Hamilton (Niagara 2011), and back-to-back recipient Connor McDavid (Erie 2014-15).

Finalists for the award include 2016 NHL Draft prospects Jordan Kyrou of the Sarnia Sting, and Adam Mascherin of the Kitchener Rangers.

“It feels great to earn the Ivan Tennant Memorial Award in my first season in the OHL,” said Keyser. “It took a lot of hard work but I received a ton of help from my academic advisors, teachers and teammates. It takes a group effort to accomplish this and I am really thankful.”

Selected by the Firebirds in the fourth round of the 2015 OHL Priority Selection, Keyser picked up his first OHL win in his first career start on October 4 with 28 saves in a 2-1 triumph over the Mississauga Steelheads and was later recognized as October’s West Division Academic Player of the Month.

“This is a well deserved award for Kyle,” said Joe Stefan, Firebirds Interim Head Coach and Assistant General Manager. “He is a very mature young man for his age and did a great job of keeping up with his studies being a first year player in this league with a demanding schedule. He understands that keeping up with your studies goes a long way for his future both on and off the ice.”

The Ivan Tennant Memorial Award is given to the Top Academic High School Player and is named in honour of Ivan Tennant, who spent a lifetime combining hockey and education.  He was the Kitchener Rangers’ Education Consultant for 20 years and a key figure on the OHL’s Education Consultant’s Committee.  First presented in 2005, past recipients include brothers Matt and Adam Pelech (Sarnia 2005 and Erie 2012), Freddie and Dougie Hamilton (Niagara 2009 and 2010), and last year’s winner Stephen Dhillon of the IceDogs.

Finalists for the award include Sasha Chmelevski of the Ottawa 67’s, and Kaden Fulcher of the Hamilton Bulldogs.

Damian Bourne, a 20-year-old from Oakville, ON, is attending Ryerson University where he has excelled in courses that include Human Resources Management, Introduction to Astronomy, Introduction to Psychology, and Principles of Marketing.

“I am very honoured to win this award,” said Bourne. “I believe it is important to have a balance of school and hockey. I would not have been able to achieve such marks without the help of our Academic Advisor Lauren Wilson, Jan Egert, and the rest of the Hockey Operations Staff within the Mississauga Steelheads. They have helped me balance the pressures of University and the strenuous OHL season.”

Playing in his fourth OHL season, the Steelheads alternate captain was the club’s first round pick in the 2011 OHL Priority Selection and scored nine goals and 17 assists for 26 points in 57 games during the 2015-16 campaign.

“Damian is a hard working, determined player, and those same qualities are reflected in his approach to his post-secondary studies,” said James Boyd, Steelheads General Manager and Head Coach. Damian is deserving of this important award.”

The Roger Neilson Memorial Award is named in honour of the Hall of Fame Coach who served behind the Peterborough Petes bench in the late 1960’s and early 1970’s.  Neilson, a former high school teacher, was a pioneer in stressing the importance of education to all of his players.  First presented in 2005, Bourne is the first member of the Steelheads to win the award.  Past recipients include two-time winners Dan Battochio (Ottawa 2005-06) and Derek Lanoue (Windsor 2010-11), while Justin Nichols (Guelph 2015) was last year’s winner.

Finalists for the award include Nathan Billitier of the Kingston Frontenacs, and Austin Hall of the Guelph Storm.

All 20 of the OHL’s member clubs provide nominees for each award with the Bobby Smith Trophy nominees representing the 2015-16 OHL Scholastic Team: