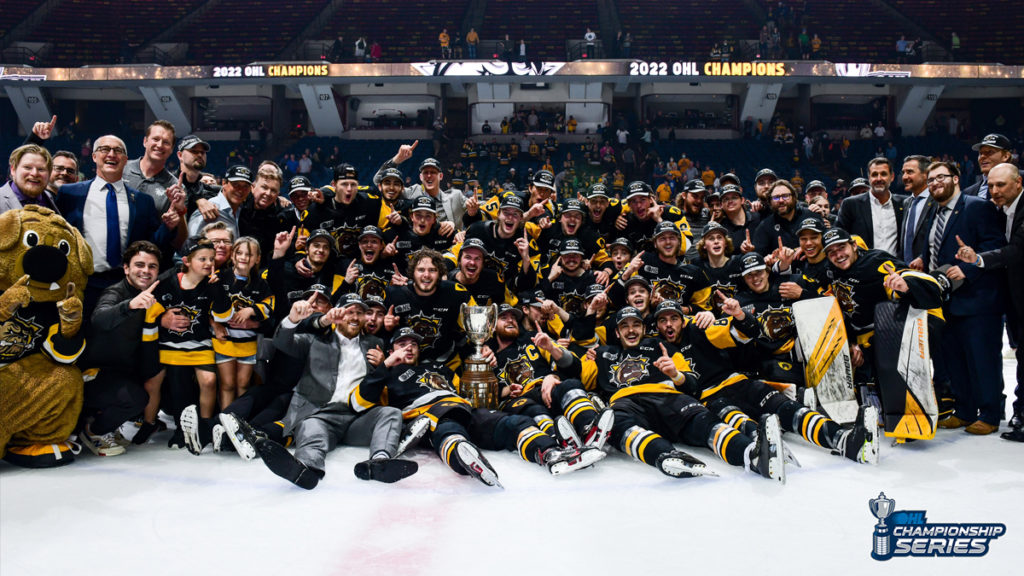 Hamilton, Ont. – An Ontario Hockey League season like no other drew to a close on June 15th, a Wednesday night at FirstOntario Centre in Hamilton as the Bulldogs hoisted the J. Ross Robertson Cup as OHL Champions, defeating the Windsor Spitfires by a score of 6-1 in Game 7.

The Bulldogs scored in each of the first and second periods before lighting the lamp twice in the third to lead 4-0. Windsor’s Alex Christopoulos ended Marco Costantini’s shutout bid with 6:22 left in the third before the Bulldogs tacked on a pair of empty netters, with Avery Hayes completing a hat trick to close out the Bulldogs’ second OHL Championship in three seasons.

“It’s a special group from top to bottom,” said Bulldogs head coach Jay McKee. “Between playoffs and regular season we played over 80-some games and there might have been three games where we didn’t think the effort was there. That’s hard to find so it’s just a special group and one I’m proud to be a part of.”

“The fans here are unreal, the fact that we got the upper bowl open is unheard of in this rink,” added Avery Hayes, who scored the first hat trick in a Game 7 of the OHL Championship Series since Jonathan Cheechoo’s five for the Belleville Bulls in 1999. “I love all of the fans. I love everyone here.”

Mason McTavish scored a pair of goals and picked up an assist for Hamilton while Logan Morrison, who earned the Wayne Gretzky ’99’ Award as OHL Playoff MVP, collected a pair of assists to give him points in all 19 of his postseason outings.

“Right when I got here I knew there was something special going on,” said McTavish. “The management is first class and obviously the players. Sometimes it’s hard to get traded to a new group of guys but I fit right in and obviously we’re OHL champions now so it’s something I’ll never forget.”

Marco Costantini turned aside 26 shots as the Bulldogs outshot the Spitfires 31-27. Both teams went 0-for-2 on the power play.

“We gave it all we had, unfortunately we fell one short,” said Spitfires head coach Marc Savard. “I’m proud of the guys, a lot of them have bright futures and a lot of them stepped up in this playoff run. I hope there were a lot of people that noticed because they did a hell of a job.”

The Hamilton Bulldogs became the third team in OHL history to start the playoffs with a perfect 12-0 record before dropping Game 1 of the OHL Championship Series in overtime to Windsor. The Bulldogs went 16-3 in the postseason, eliminating the Peterborough Petes, Mississauga Steelheads and North Bay Battalion before besting Windsor in seven games, coming back from a 2-1 series deficit.

Bulldogs captain Colton Kammerer, who has been sidelined with an injury since Game 2 of the series, donned his equipment to accept the J. Ross Robertson Cup from Commissioner David Branch. The Bulldogs won Game 7 in front of a crowd of 11,779, a new Championship Series record in the League’s modern era (post 1980).

The Bulldogs advance to represent the OHL at the 2022 Memorial Cup presented by Kia set to begin in Saint John, New Brunswick on Monday, June 20. The Bulldogs open the tournament against the host Saint John Sea Dogs on Monday night and will also compete against the QMJHL champion Shawinigan Cataractes and WHL champion Edmonton Oil Kings in the national showcase.