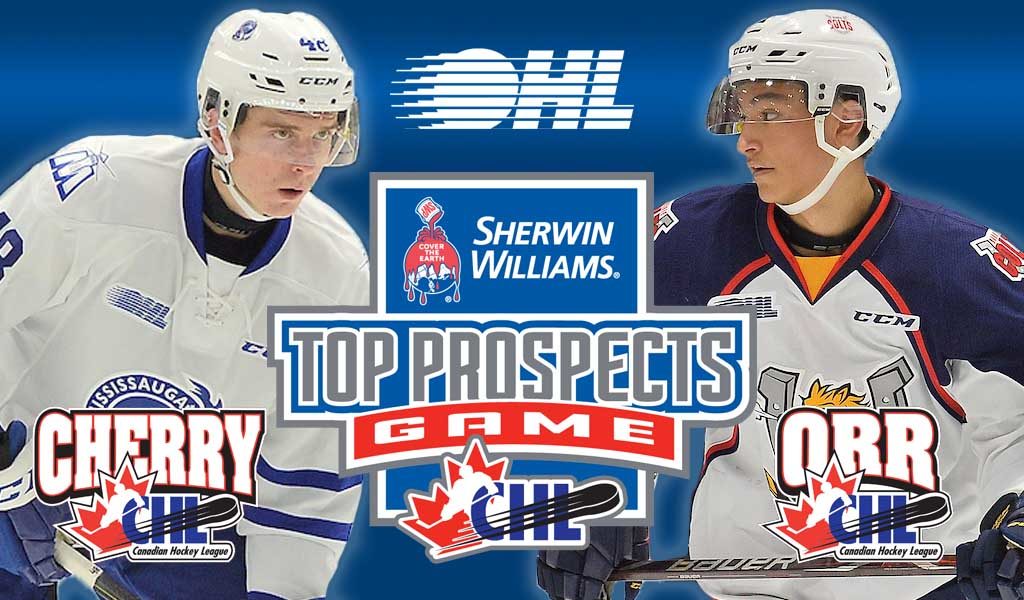 Toronto, ON – One week before the puck drops in Red Deer at the 2019 Sherwin-Williams CHL/NHL Top Prospects Game, the Canadian Hockey League has announced the captains and alternate captains for the January 23rd showcase of the league’s top NHL Draft eligible talent.

Dylan Cozens of the Lethbridge Hurricanes and Kirby Dach of the Saskatoon Blades have both been appointed captains among the 40 top prospects from across the Western Hockey League, Ontario Hockey League, and Quebec Major Junior Hockey League who were selected for the 24th annual competition by NHL teams.  Cozens will lead Team Cherry along with alternate captains Thomas Harley of the Mississauga Steelheads and Raphael Lavoie of the Halifax Mooseheads.  Dach will lead Team Orr with alternates Jakob Pelletier of the Moncton Wildcats and Ryan Suzuki of the Barrie Colts.

A 17-year-old from Whitehorse, YT, Cozens is currently inside the top-10 in WHL scoring with 25 goals and 33 assists for 58 points in 43 games.  He was originally selected by the Hurricanes with the 19th overall pick in the 2016 WHL Bantam Draft and went on to capture WHL Rookie of the Year honours last season.  Prior to the 2018-19 campaign he represented Canada at the 2018 Hlinka Gretzky Cup where he won gold in Edmonton as one of the team’s alternate captains.

Dach, who turns 18-years-old on Monday, hails from Fort Saskatchewan, AB, and was chosen by the Blades with the second overall pick in the 2016 WHL Bantam Draft.  He currently leads his team in scoring and ranks inside the league’s top-20 overall with 48 points in 41 games including 17 goals and 31 assists.  Dach was also a member of Canada’s National Men’s Summer Under-18 Team that won gold at the Hlinka Gretzky Cup finishing third in team scoring with seven points in five games.

“It’s pretty special to be part of this game in the first place and to be able to wear a letter on my chest is an incredible honour,” Dach said of being named captain of Team Orr. “It’s something I’ll take very seriously and cherish for the rest of my life.”

Over the past 23 years, seven Hurricanes and 17 Blades have competed in this event, however this marks the first year that either club will be represented with a showcase captain.

Team Cherry leaders Harley and Lavoie are both in the midst of breakout seasons in their own regard.  Harley, a 17-year-old defenceman from Syracuse, NY, has more than doubled his rookie point total for the Steelheads at the season’s midway mark with 34 points in 42 games.  The 18-year-old Lavoie, from Chambly, QC, received an invite to Canada’s National Junior Team Selection Camp and is producing at just over a point-per-game pace for the Mooseheads with 19 goals and 24 assists through 40 games.

Both Team Orr alternates are no strangers to Alberta having competed for Canada at the Hlinka Gretzky Cup in August.  The 17-year-old Pelletier who hails from Quebec just matched his goal total from his rookie season with the Wildcats tallying 23 to go along with 35 assists for 58 points in 41 games which ranks inside the QMJHL’s top-10.  Suzuki, a 17-year-old from London, ON, and first overall pick in the 2017 OHL Priority Selection, has 12 goals and 29 assists for 41 points in 39 games for the Colts.

The 2019 Sherwin-Williams CHL/NHL Top Prospects Game is proudly supported by title partner Sherwin-Williams, and CHL associate sponsors CIBC, Kia Canada, Cooper Tires, and Kubota Canada.  The game will be broadcast live across Canada on Sportsnet and TVA Sports, and in the United States on NHL Network.

Tickets are still available and can be purchased via reddeerrebels.com or ticketsalberta.com.  For further ticket details please contact the Rebels office at 403-341-6000.

Ask Sherwin-Williams™
For 150 years, Sherwin-Williams has been an industry leader in the development of technologically advanced paint and coatings. As North America’s largest specialty retailer of paint and painting supplies, Sherwin-Williams is dedicated to supporting both do-it-yourselfers and painting professionals with exceptional and exclusive products, resources to make confident colour selections and expert, personalized service at its more than 4,000 neighbourhood stores. For more information, visit sherwin-williams.ca. Join Sherwin-Williams on Facebook, Twitter, Pinterest, Instagram, LinkedIn and Tumblr.