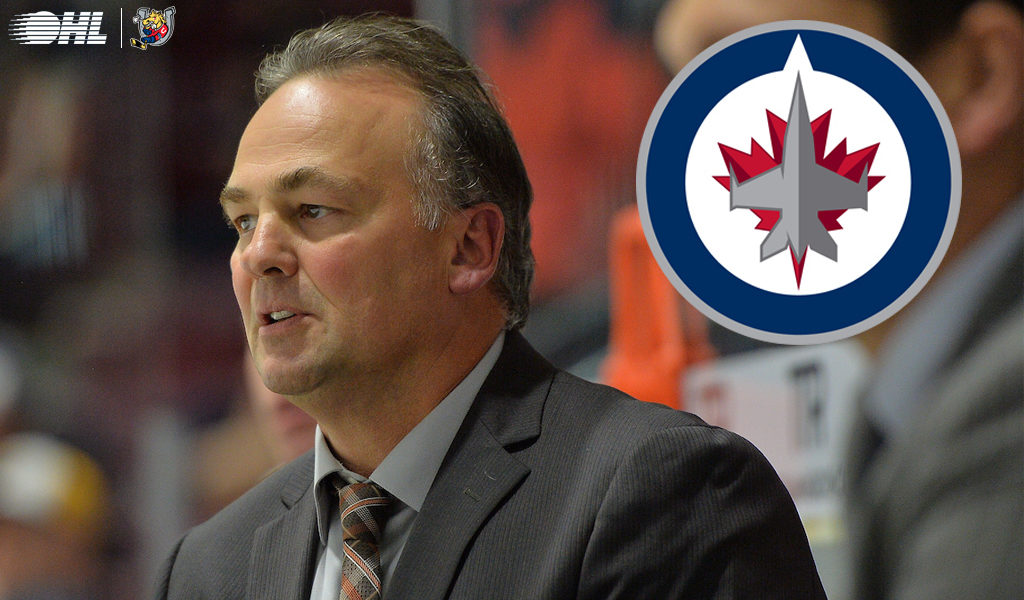 The Winnipeg Jets honoured Barrie Colts head coach and long-time franchise cornerstone Dale Hawerchuk prior to puck drop on Tuesday before a game against the visiting Arizona Coyotes.

After 713 career games, 379 goals and 929 points in a Winnipeg uniform, Hawerchuk watched as his #10 banner was raised to the heights of Bell MTS Place where it joined the likes of Bobby Hull (9), Ulf Nilsson (14) and Anders Hedberg (15) in the Winnipeg Jets Hall of Fame.

Dale Hawerchuk was inducted into the @NHLJets Hall of Fame during a pre-game ceremony at Bell MTS Place. #ARIvsWPG pic.twitter.com/quXCA2RM0Q

“Everything about the Jets was huge to me,” said Hawerchuk, who was chosen first overall by Winnipeg in the 1981 NHL Draft after he led the Cornwall Royals to a second consecutive Mastercard Memorial Cup title. “Not many guys make the NHL at 18 and I can tell you, the first two weeks [of training camp], I didn’t think I was going to make it [either].”

Hawerchuk went on to do great things in the Gateway to the West, recording six different 100-point seasons in a Jets uniform before spending the final six years of his NHL career between Buffalo, St. Louis and Philadelphia.

“It (Winnipeg) was such a good fit for me,” Hawerchuk added. “I was hockey crazy and so was this town and this province.”

Dale Hawerchuk, the humble, underappreciated superstar, will be inducted into the #NHLJets Hall of Fame tonight. https://t.co/Vz33p2bZ3c

Now in his eighth season at the helm in Barrie, Hawerchuk has won 249 career OHL regular season games, registered four different 40-win seasons and won an Eastern Conference Championship in 2013.

During his time with the Colts, he has contributed to the development of current NHL competitors in Aaron Ekblad (Florida Panthers), Mark Scheifele (Winnipeg Jets), Tanner Pearson (Los Angeles Kings) and Kevin Labanc (San Jose Sharks).

Dale Hawerchuk led the Winnipeg Jets in scoring during his nine seasons he spent with the team, from 1981-1990.

? @markscheifele55 expands on the influence Dale Hawerchuk had on him, ahead of Dale’s induction into Hall of Fame at tomorrow night’s game. pic.twitter.com/j0h42gWizT