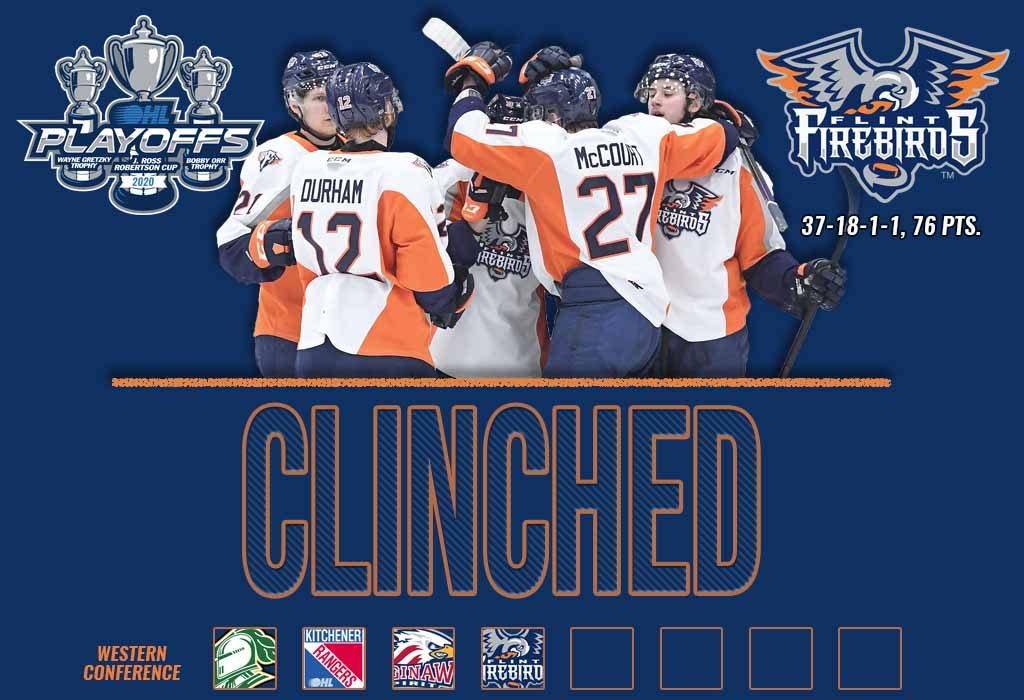 After a two year absence, the Flint Firebirds will be back in the OHL Playoffs this spring.

Despite Saturday’s demise of their franchise record-setting 15-game winning streak, a Soo Greyhounds loss on Sunday afternoon secured Flint’s playoff fate as the 37-18-1-1 Firebirds are headed to the postseason for the second time ever.

Flint currently trails the reigning West Division champion Saginaw Spirit by one point in the standings, holding home ice advantage with a seven point cushion over the fifth place Windsor Spitfires. The ‘Birds have won 10 straight on the road and boast 13 different players with at least 10 goals in their lineup.

The Firebirds are led by Dallas Stars prospect Ty Dellandrea who helped guide Canada’s National Junior Team to gold in January. Dellandrea’s 70 points (32-38–70) over 47 games are followed by first-year winger Evgeniy Oksentyuk‘s 69 (30-39–69) while fourth-year blueliner Riley McCourt is among the league’s offensive leaders among defencemen with 59 (18-41–59) to his credit.

In goal, defending OHL champion Anthony Popovich has been steady, going 26-14-1-0 with a 3.60 goals-against average and .897 save percentage while Luke Cavallin has been an effective secondary option, riding four straight victories.

The Firebirds will be seeking their first-ever playoff series win when the 2020 OHL Playoffs get started.