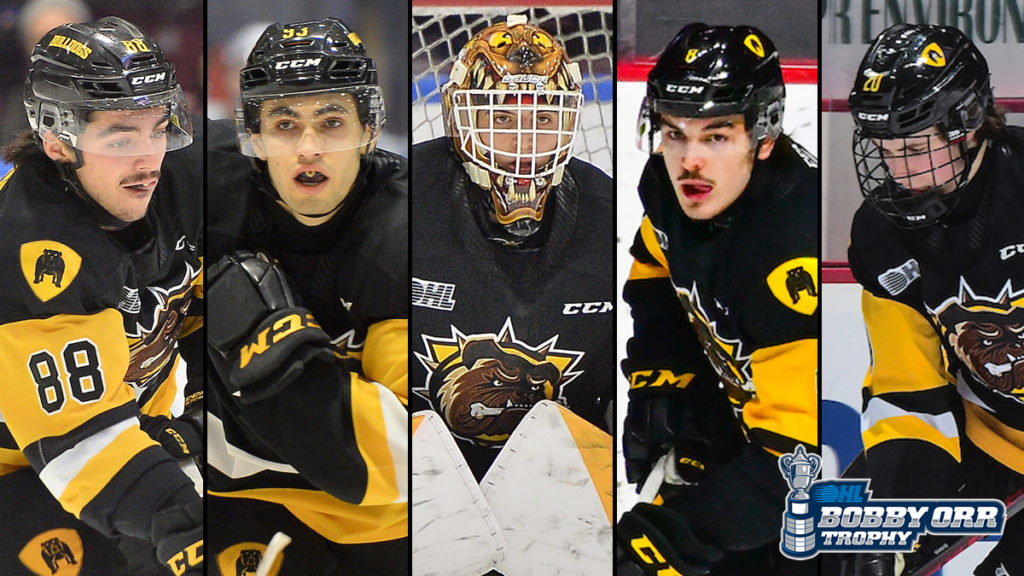 The Hamilton Bulldogs have appreciated the support of the home crowd all season, but there are five players on the roster who may get an extra boost from the FirstOntario Centre faithful.

Following the Bulldogs throughout their minor hockey careers, Arber Xhekaj, Marco Costantini, Mark Duarte, Patrick Thomas and Ethan Sims all share the honour of representing their childhood hometown, giving back to the community on and off the ice. Fuelled by the support of family and friends, the Hamilton natives take a lot of pride in wearing the Bulldog on their chests.

“The city of Hamilton means a lot to me. I grew up here and lived in Hamilton for almost my entire life so it’s special to me,” said netminder Costantini, who leads the OHL Playoffs with a 1.88 goals-against average. “It’s always nice to see everyone who supports me and all the fans who come out to cheer us on.”

Big blueliner Arber Xhekaj, an imposing figure on the Bulldogs blue line who had a goal and an assist in Game 1, echoes those sentiments.

“It means a lot,” he said. “Growing up eight minutes down the road and watching the Bulldogs in the AHL, then the OHL and now being a part of it is a complete honour. I love this city and everyone who comes and supports myself and the team.”

Xhekaj helped the Bulldogs reach the third round, scoring the overtime series winner against the Mississauga Steelheads last week. Hamilton has scored consecutive series sweeps over Peterborough and Mississauga, winning their 19th straight contest on Friday.

Presenting finalists for the Jim Rutherford Trophy presented to the #OHL Goaltender of the Year:

One should mention, the Bulldogs have been put together by a Hamilton native. Steve Staios, a former long-time NHL defenceman and OHL graduate, grew up in the city. He’s served as the club’s president and general manager since their OHL inception in 2015-16.

FirstOntario Centre was good to the Bulldogs in 2021-22, as they went 27-4-1-2 on home ice for the League’s best home record. Following their 5-2 win over North Bay on Friday, they’ve won 23 consecutive in Steeltown dating back to their last home loss on December 30.

Game 1 yielded a crowd of 4,162. The Bulldogs and their five locals will be looking for more support on Sunday night when they host the Battalion in Game 2 at 7:00pm.