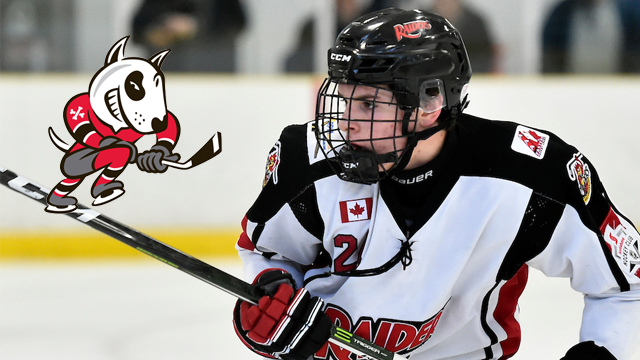 St. Catharines, Ont. – Niagara IceDogs General Manager Joey Burke announced Tuesday that 2017 third round selection Ian Martin has agreed to a Standard Player Agreement with the Club. The forward was selected in the third round, 51st overall by the IceDogs in this year’s Ontario Hockey League Priority Selection, and has officially committed to the team.

“We are very excited to be able to add Ian to the IceDogs,” said Burke. “He is a player who caught my eye early in the year and has continued to improve day by day. Ian is a young man with a truly limitless ceiling, who strives to get better every year. I have no doubt his hard working playing style combined with his size and tools will allow him to become a fan favourite here in Niagara. Ian will be a great fit with our group and we are extremely excited to add him to the IceDogs family.”

The 5-foot-10 forward shined in Minor Midget this past season, posting 15 goals in just 22 games as a member of the Ajax-Pickering Raiders. He brought a dynamic offensive presence combined with excellent vision and goal scoring ability to the Raiders on a nightly basis. His game breaking skill helped lead the Raiders to the OMHA Championship Weekend.

He continued his consistency into the OHL Cup, adding three goals and five points over four games during the week-long tournament.

After signing, Martin said, “Its a tremendous honour to be a part of the IceDogs family. I am very excited to get things started in September.”