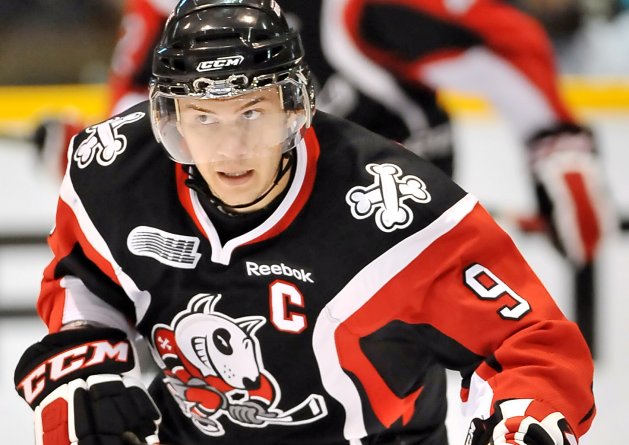 Toronto, ON – The Ontario Hockey League today announced that forward Andrew Agozzino of the Niagara IceDogs is the Leo Lalonde Memorial Trophy winner awarded to the OHL’s Overage Player of the Year for the 2011-12 season.

Agozzino tied for fifth in league scoring with a career-high 88 points in 67 games scoring 40 goals and 48 assists leading the IceDogs to their first Central Division title and best overall record in team history with a record of 47-18-0-3 for 97 points.  Agozzino becomes the second member of the IceDogs’ to win the award following his former teammate Michael Swift who earned it in the club’s first season in Niagara back in 2007-08.

“It’s a great feeling to win this award and it’s something I was looking forward to at the start of my overage year,” said Agozzino.  “Having the opportunity to be an overager on the same team I started with is something special and I would like to thank the entire IceDogs organization for the opportunities they have given me.”

A 21-year-old native of Kleinburg, ON, Agozzino played all five of his OHL seasons with the IceDogs after being the franchise’s first ever draft pick selected 15th overall in the 2007 Priority Selection.  This season the three-year captain led the IceDogs in both goals and points for the third time in five years finishing his career with a franchise record 159 goals and 147 assists for 306 points in a franchise record 318 regular season games played.  In 2010, Agozzino represented the IceDogs at the OHL All-Star Classic in Kingston, ON, where he was named Eastern Conference Player of the Game scoring an All-Star Classic record four goals.

“We couldn’t be more happy or proud of Andrew winning the Overage Player of the Year Award,” said IceDogs owner Bill Burke.  “Andrew is everything you could ask for in a leader, hockey player and a person and is extremely deserving of this award.  He has meant everything to this organization in our five years here and will be impossible to replace.”

The Leo Lalonde Memorial Trophy is awarded annually to the top overage player of the year as selected by OHL General Managers.  Teams were not permitted to vote for players from their own hockey club. Players received five points for a first place vote, three points for a second place vote and one point for a third place vote.

Agozzino will be formally presented with the Leo Lalonde Memorial Trophy at the 2011-12 OHL Awards Ceremony scheduled for June 5 at the Hockey Hall of Fame in Toronto.