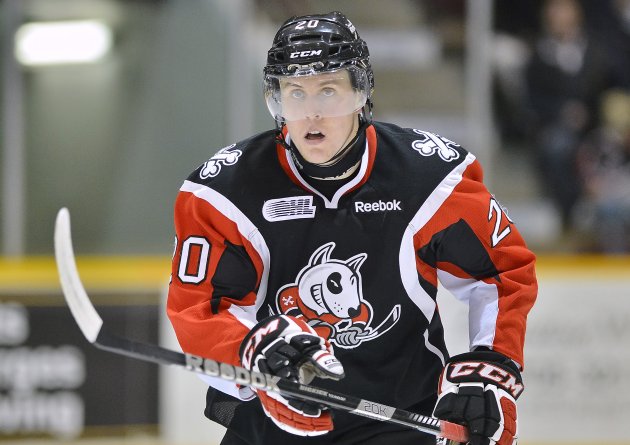 Toronto, ON – The Ontario Hockey League today announced that for the second time this season Brett Ritchie of the Niagara IceDogs is the OHL Player of the Week.  For the week ending March 3, Ritchie scored five goals and three assists for eight points in three games with a plus-minus rating of plus-5.

Ritchie led the IceDogs to a pair of wins last week helping the club clinch a berth in the postseason for their sixth straight season in St. Catharines.  Ritchie scored the lone goal for the IceDogs in a 7-1 loss to the Plymouth Whalers on Thursday before collecting three points on Saturday night scoring twice including a shorthanded marker and adding an assist as first star of a 5-4 overtime win over the first place Belleville Bulls.  He claimed first star honours again on Sunday scoring twice including his 38th goal of the year plus two assists in a 9-4 win over the Windsor Spitfires.

Ritchie, a 19-year-old from Orangeville, ON, is playing in his fourth career OHL season.  Selected by the Dallas Stars in the second round of the 2011 NHL Entry Draft, Ritchie is 13th in league scoring and continues to build on his career-best offensive totals this season with 38 goals and 34 assists for 72 points in just 49 games with an impressive plus-minus rating of plus-35.

Also considered for the award this week was Florida Panthers prospect Vince Trocheck of the Plymouth Whalers and 2013 NHL Draft prospect Max Domi of the London Knights who each scored four goals and three assists for seven points in three games.  In goal, the Whalers’ Alex Nedeljkovic posted a 3-0-0-0 record with a shutout victory and a goals-against-average of 1.00 and save percentage of .957.