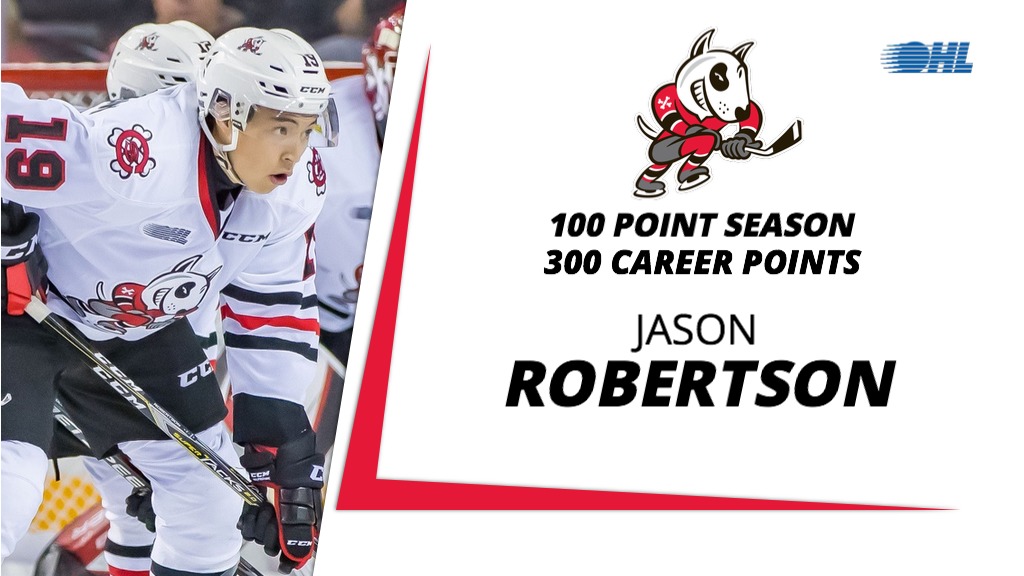 The Niagara IceDogs forward picked up two assists in Friday’s 6-4 road win over the North Bay Battalion to surpass the 100-point milestone on the season and in doing so, recorded the 300th point of his OHL career.

With his assist on Studnicka’s goal in the second period of tonight’s game in North Bay, Jason Robertson has reached 100 points on the season, and 300 #OHL regular season points!#BornReady #GoStars pic.twitter.com/QuA5vROhCf

A second round pick of the Dallas Stars in 2017, Robertson has led the OHL in shots on goal in each of the past two seasons and currently sits fifth in that category with 262 to his credit. The 19-year-old from Northville, Mich. has 101 points (42-59–101) over 54 games between Niagara and Kingston this season.

Robertson’s OHL career includes 301 points (143-158–301) over 244 career regular season games, with 46 of his goals coming on the power play. He recently hit the 40-goal plateau for the third straight season.

With the 🍎 it’s 💯 points this season for the @DallasStars prospect and @OHLIceDogs forward and 3️⃣0️⃣0️⃣ on his career. pic.twitter.com/ge7YmJN9Cz

The 6-foot-2, 200Ib flank recently won silver with the United States at the 2019 IIHF World Junior Hockey Championship where he recorded seven points (1-6–7) in as many games.