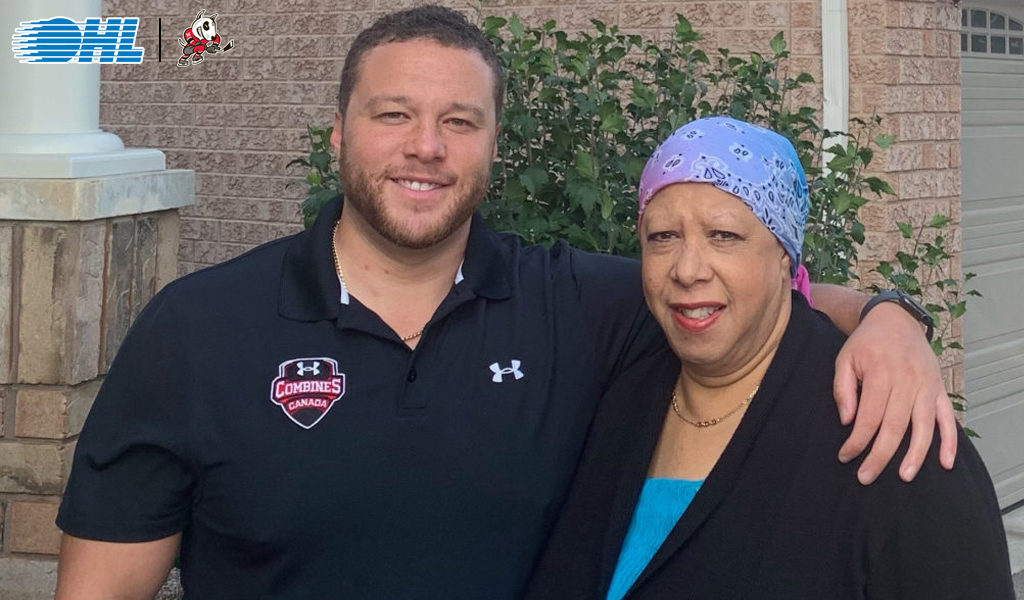 Sean Teakle had achieved his dream of coaching with an Ontario Hockey League franchise.

A process that dates back a year earlier, when he had previously interviewed with the organization but was passed over on that occasion. He must have made an impression, however, because Niagara had no difficulty bringing him in for another interview, and ultimately hiring him the second time around, a year later.

Unbeknown to Sean only a day earlier his mother, Patricia (61), had been diagnosed with breast cancer. Incredibly she held back the difficult news to allow her son his moment. To this day, Sean is in awe of his Mom’s and Dad’s resolve and selflessness.

“It puts in perspective what your parents do for you. They were so proud of what I had gotten the day before; they didn’t want to rain on my parade. That gives you an idea of what your parents sacrifice for you to make sure you’re going forward.

“My mom has been there through everything from my first skating lessons to this very day. I know she is super proud.”

With his family’s support and a great deal of hard work, Sean has built an impressive resume. He brings a decade of coaching and scouting experience to the IceDogs’ organization. In 2010, Teakle began his coaching career with the Streetsville Derbys of the Ontario Provincial Junior A Hockey League as an assistant coach. In 2013, he was named an Assistant Coach with the Milton Icehawks of the Ontario Junior Hockey League. Simultaneously, he was named Head Coach at The Hill Academy, where he coached through 2019. Following his time with the Icehawks, he was an associate coach with the North York Rangers of the OJHL from 2016-2020. In addition to coaching, the 31-year-old also scouted for the Ottawa 67’s from 2015-2020.

“My parents are a huge part of the success I have had so far. My mom has always been so supportive of everything. If we needed anything, we can always ask her. She is also the first person to tell you if you’re doing something right or wrong. My dad has taught me so much, he designed me into the hockey player that I was and moulded me into the coach that I am today. The lessons they taught me are endless, I could go on for hours about what they’ve done for us.”

“The big thing with cancer is it doesn’t just affect one person it affects your whole family.”

On June 14th, Patricia Teakle awoke with extreme soreness in her breasts and immediately called her family doctor, despite it being a Sunday. Within days of that phone call, she underwent two mammograms and an ultrasound at Credit Valley Women’s Clinic in Mississauga. Within a week she had a diagnosis; breast cancer.

Shortly after receiving her diagnosis, she had met with an oncologist and underwent further testing within the week to ensure she was able to start treatments. With the unwavering support of family and medical professionals by her side, she has proceeded through her battle swiftly. Having just finished her sixth round of chemotherapy, she is being paired with a surgeon who will advise the next steps as Patricia continues to fight. “Their whole setup is just so amazing. They do so much follow up on you to make sure that you’re okay, that you’re feeling okay. They really take great care of me.”

Despite the ongoing global pandemic, the support Patricia has received from family has been unwavering.”My family has really helped me get through having them here and talking to them. Telling them what I’m feeling has been amazing.” The limited social interactions allowed in these pandemic times have been a strength for Patricia. Having her family close together has been helpful. Having someone to listen to the processes of treatment and next steps has been cathartic, in a sense. The support extends outside of her family. With one friend currently in treatment for breast cancer, and another who’s 6 years in remission, the community they have formed to remain positive and support each other has been paramount as she continues to fight.

Although it was been difficult to undergo treatment appointments alone, the support provided at the clinics has been incredibly helpful. To adhere to COVID-19 guidelines, Patricia is unable to bring anyone to her appointments with her. The appointments are long, lasting between 4 or 5 hours every three weeks. For Patricia, the long sessions are a time for rest. To prepare for the sessions, she’s given different medications to limit nausea or weakness. Family friends had put together a care package of activities for her treatment sessions and books to help keep her occupied. Although she arrives prepared for appointments, the drowsiness from the medications normally puts her to sleep.

Now that she has finished the first six rounds of chemo, Patricia is preparing for surgery. After surgery, it is expected Patricia will need to follow up with additional rounds of radiation and chemotherapy before she will be able to ring the bell marking the end of this battle. “I can’t wait to ring that bell.”

Early detection, however, is key. If there’s one message Patricia is able to spread from her experiences is that early detection is incredibly important. “If even the slightest thing doesn’t feel right, get it checked just to be safe.”

Pink the Rink: Pink jersey hockey is the most important kind

Inspired by his mother, Sean is excited to join the IceDogs, so that he can contribute to the team’s efforts to supporting the Canadian Cancer Society’s (CCS) fight against women’s cancers.

One night out of the year the IceDogs’ wear specialty pink jerseys to commemorate their partnership. For the first time ever, last season the pink jerseys bared the names of player’s and fan’s loved ones, who have been affected by cancer. Those who donated to have their loved one’s name on the jersey also had the option to receive a replica t-shirt, to match the jerseys. The game-worn jerseys are auctioned off live post-game with proceeds going to CCS. 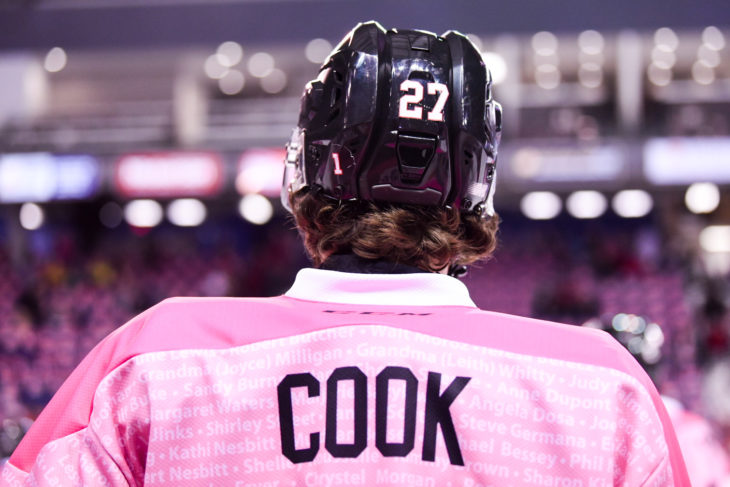 The IceDogs and the Canadian Cancer Society

The IceDogs have worked with CCS Niagara for the past 13 years. Similar initiatives have been adopted by many CHL teams across the country with great success and excellent community response.