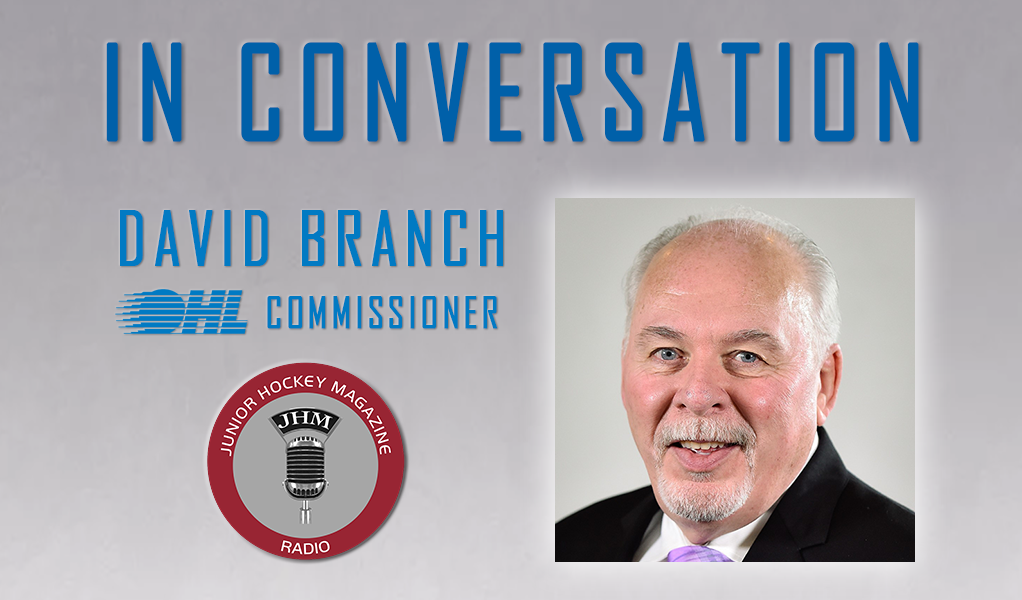 Entering his 40th season as commissioner of the Ontario Hockey League, David Branch chatted with Junior Hockey Magazine about some recent major changes, including a new face of the CHL, how the league is interacting with fans in the digital age, the league’s invaluable scholarship program, as well as the CHL’s continued success in supplying pro-level talent:

Junior Hockey Magazine: This is a big transition for you. You were the President of the CHL since 1996, but in July, Dan MacKenzie was named the first full-time president of the CHL because you’ve also got your duties with the OHL. Give a sense of what went on behind that transition.

David Branch: It’s something that I on a personal front was trying to advance for a few years, quite frankly. The timing just seemed right to move forward and have the first full-time president of the CHL. The CHL has grown and evolved over the years and it was just taking up so much more added time, and we needed someone who could focus entirely on the CHL with their time and energy, with some new ideas. Dan MacKenzie brings that with 15 years with the NBA and other elements to his wherewithal. He’s going to really help us to continue to grow and help our players enjoy the finest experience possible.

JHM: How important is the whole new digital aspect of technology to the CHL moving forward in terms of how fans get their highlights, how they get that information?

DB: We all recognize what social media means today. On a positive front, we are announcing and launching our first-ever CHL app in the middle of this month. That’s an exciting piece for all of our teams and we’re very much looking forward to it. When you look at how we communicate today with our fans and in trying to engage new fans, there is no better way than through Twitter, Facebook, Instagram. It’s the quickest, most efficient way for us to tell our story in a creative fashion. We’ve got just now over 300,000 Twitter followers, as an example, and we’re continuing to expand and grow that. That’s a huge piece. It’s also an area we’re working to educate our players on social media. As we know, there are some pitfalls, so we’re trying to educate them, our coaches, our managers, and everyone involved in our league. It’s a whole new age, it’s an exciting time, and I’m very fortunate that we’ve got some great young people leading the charge in that area on our behalf.

JHM: How important was it to use this kind of a platform to inform people of the options when you play major junior in this country that education is still a very real possibility?

DB: It’s huge. For years and years, the attitude was that if you played junior hockey, you didn’t go to school or you couldn’t get your education. Through a lot of work from a lot of people right across the country, that has changed. We’ve been working now for the last 20-plus years to not only grow our education platform, but also tell the stories so people have a better perspective of who we are and what we are. Last year, over $10 million was given by our owners, our teams to support the scholarship program for the players who had graduated to USPORTS. Some players go to university and choose not to continue on with hockey for whatever reason. It’s a big part of who we are today. It’s so important to the most important people in the game – and that’s the players.

DB: Very proud. The great thing is there is competition out there. When you look at the growth of junior hockey in Sweden, Finland, continued expansion in Russia, the U.S. has taken up our game and played extremely well – competition makes you better. To continue to be the No. 1 supplier of talent to the NHL is huge, and we’re working diligently to increase and expand programs to allow for the development of the needs of our players both on and off the ice.