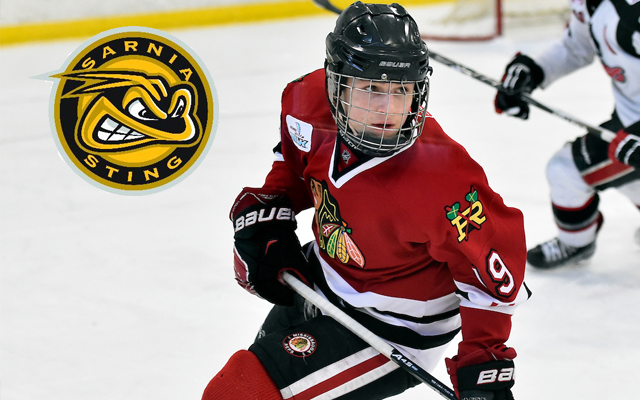 SARNIA, ON – General Manager, Nick Sinclair announced today that first round pick, Jamieson Rees has agreed to terms on a Standard Player Agreement and Education Package with the Sarnia Sting.

Rees, who captained the Mississauga Reps to an OHL Cup Championship last season, was chosen 9th overall by the Sarnia Sting in the 2017 OHL Priority Selection. In 32 regular season contests with the reps, Rees posted 24 goals and 16 assists for a total of 40 points (1.25 PPG). In 8 OHL Cup games, the 5’10” centreman led his team with 6 goals and 11 points to go along with a plus-minus rating of +13. He was named to the OHL Cup All-Star Team for his efforts.

The Hamilton-native is expected to suit up for Team GTHL Red in the upcoming OHL Gold Cup taking place at the Activia Sportsplex in Kitchener from May 4-7.

“This is a very exciting day for the Sting organization. Jamieson is a player that we highly coveted from the first time we saw him play and were thrilled to select him with the ninth overall pick in this year’s draft,” comments Sinclair. “There are many exciting elements to his game that fans in Sarnia are going to love to watch. Jamieson is the type of player that makes his teammates better. His combination of skill, grit, speed and hockey sense will allow him to make a quick transition into the OHL and ultimately have great success at this level and beyond.”

“On behalf of myself and the entire organization, I’d like to officially welcome Jamieson and the Rees family to the Sarnia Sting Hockey Club,” adds Sinclair.