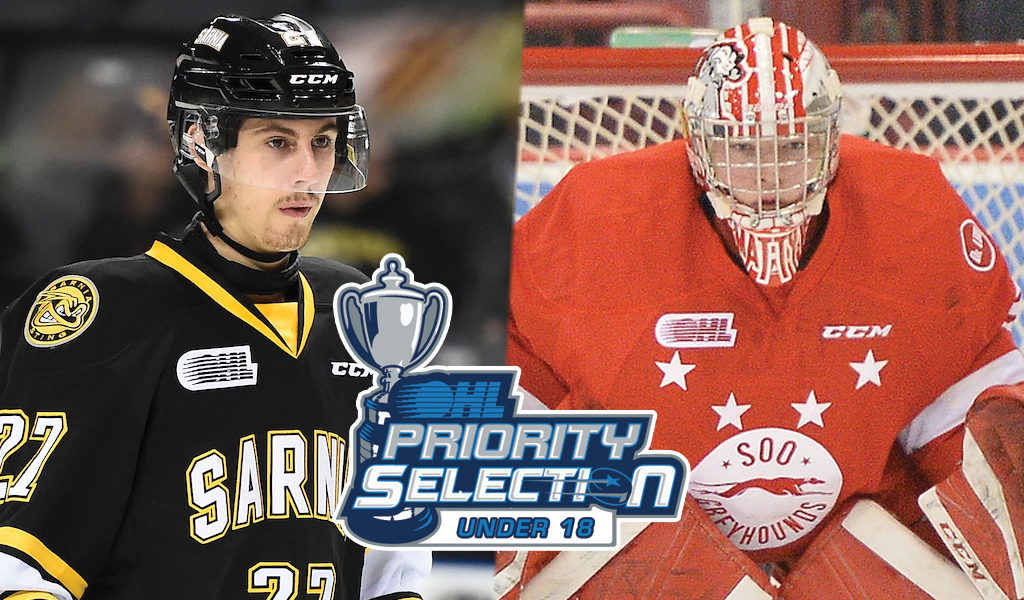 Despite being taken in the late rounds, a year late or in Anthony Cirelli‘s case, not drafted at all, the well-documented success stories of Ontario Midget AAA hockey graduates like Andrew Mangiapane and Nick Paul saw fresh-faced late bloomers work for every inch during their time in the Ontario Hockey League before coming out on the other side as polished, well-rounded players.

Ontario’s Midget AAA circuit has supplied the league with considerable talent in recent years, with a pair of prominent OHL Playoff performers among the ranks in undrafted free agent signings Sean Josling of the Sarnia Sting and goaltender Matthew Villalta of the Sault Ste. Marie Greyhounds.

Josling is currently among the league’s playoff scoring leaders, pacing Sarnia with 13 points including five goals and eight assists over nine games. He’s had points in four of his last five outings, helping the Sting take a 2-1 second round series lead over the Kitchener Rangers.

The Toronto native was signed as a free agent by Sarnia prior to last season after he led the North York Rangers to a Telus Cup Championship with four points (3-1–4) over the seven game tournament that took place in Quispamsis, New Brunswick.

“When you look at what Sean is doing now it’s hard to believe that he went undrafted,” commented Sting general manager Nick Sinclair. “He just needed a bit more time and went down a different road to get where he is today, and that’s what’s so special about our game is that every young player is different.”

After 21 points (11-10–21) in his rookie season, Josling earned invitations to the Detroit Red Wings development and rookie camps last summer and returned to put up 21 goals, 17 assists and 38 points over 68 games as a sophomore.

“Sean has put the work in, stayed committed to the process and it’s all paying off for him,” Sinclair added. “It’s committed players like him that we hope to find tonight in the Under-18 Priority Selection.”

In Sault Ste. Marie, goaltender Matthew Villalta boasts a career regular season record of 65-8-2-2 with a 2.52 goals-against average and .912 save percentage after being signed as an undrafted free agent from the Greater Kingston Jr. Frontenacs Midget AAA team prior to the 2016-17 season.

“We liked what we saw from Matthew during his minor midget season, but sometimes you have to see more from a player to make a good judgment and that’s what his time in Midget AAA did in this case,” said Greyhounds general manager Kyle Raftis. “He played on a team where he saw a lot of minutes, faced a lot of shots and gave him the opportunity to further develop his game. It was during that season that we decided we’d like to add him to our program and he’s been a valuable addition.”

Villalta earned the FW ‘Dinty’ Moore Trophy last season, setting a new Greyhounds franchise record with a 2.41 goals-against average. After his rookie performance caught the attention of the Los Angeles Kings who selected him in the third round of the 2017 NHL Draft, Villalta returned for his second tour of duty and tied a club mark with 40 wins, backstopping the Hounds to their best season in franchise history.

“It was key that the league implemented this draft,” noted Sinclair. “It’s really made teams go out and weed through the bushes and pay attention to Midget AAA hockey a lot more closely.

“There’s a lot of talent out there and we’re looking forward to adding some of that to our depth chart this evening.”

Tonight’s Under-18 Priority Selection gets underway at 7:00pm with live coverage at ontariohockeyleague.com. Follow along pick-by-pick or tune in via a live audio stream.