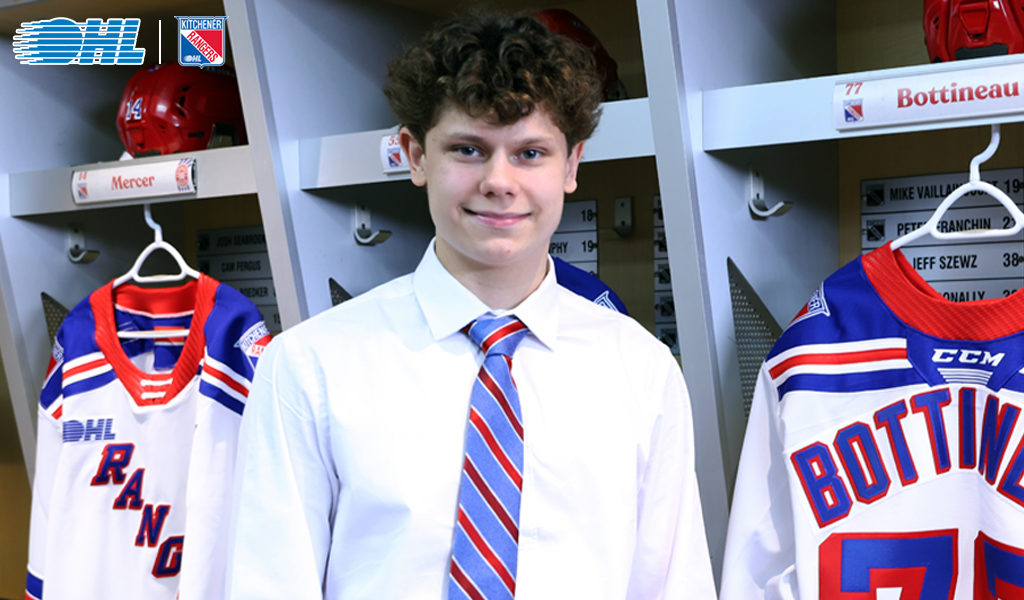 “We would like to welcome Justin and his family to the Rangers,” said Kitchener Rangers General Manager Mike McKenzie. “Justin has a nice blend of skill and work ethic. He is a heart-and-soul type of player that rarely takes a shift off and is why we are excited to sign him today. He has a bright future and we look forward to seeing his development as a Ranger.”

Bottineau, a native of Burlington, Ont., was selected by the Rangers in the third round (56th-overall) of the 2022 OHL Priority Selection. He recorded an impressive 42 points (21G, 21A), including a plus-31 rating, in 37 games during the 2021-22 season with the Toronto Marlboros AAA minor hockey team in the Greater Toronto Hockey League (GTHL).

“Growing up, you look up to the guys in the OHL,” said Bottineau. “Being from Burlington, and then seeing it was Kitchener that picked my name, was really exciting for my family and I. I’ve heard great things about the coaching staff and I’m looking forward to putting the work in to earn a spot on the team.”

The six-foot, 165-pound forward, played a key role in leading the Marlboros to a first-place finish in the GTHL standings, posting a 24-2-2 record in 28 games during the 2021-22 campaign. Notably, Bottineau was invited to participate in the 2022 GTHL Top Prospects Game in March, where he helped lead Team Black to a 4-2 victory over Team White in the event.

At the OHL Cup this past March and April, Bottineau tallied more than a point-per-game average (1.60), recording eight points (2G, 6A), including a plus-5 rating, in just five games.