Kaliyev a star in the making for Bulldogs 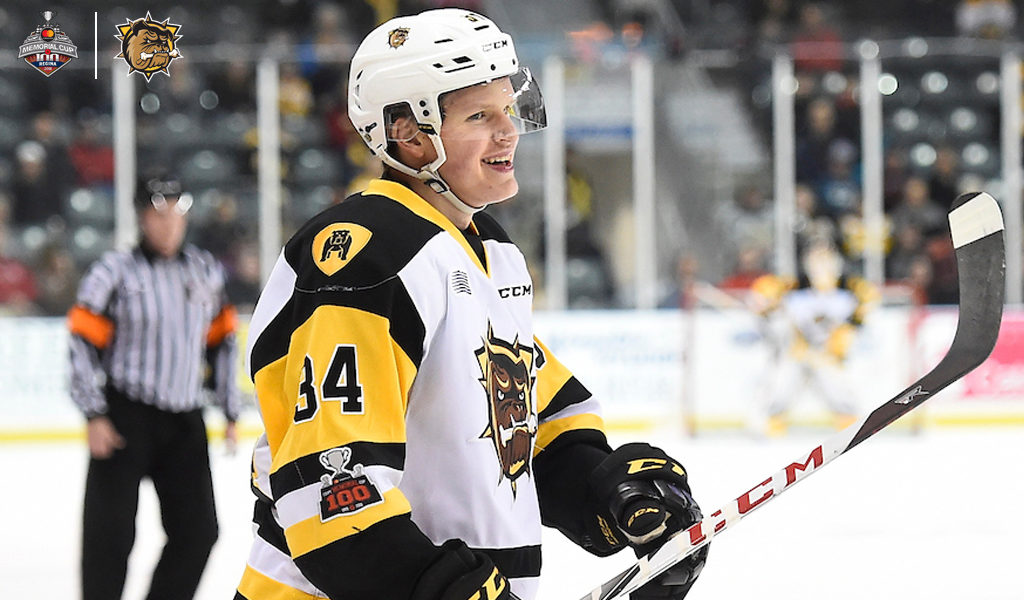 The 2018 OHL Champion Hamilton Bulldogs proved to be a well-rounded and balanced team from top-to-bottom in the postseason, enabling them to overcome all obstacles to hoist the Robertson Cup in just their third campaign.

It’s a sure sign that a team has considerable depth when a 31-goal scorer is slotted in on the fourth line, and embracing that assignment with a team-first attitude.

With a veteran-heavy forward corps led by Robert Thomas, Brandon Saigeon, Matthew Strome, Will Bitten, Ryan Moore and Nicholas Caamano, it can be easy to overlook the impressive accomplishments of 16-year-old Arthur Kaliyev who is shaping up to be a top prospect for the 2019 NHL Draft.

Hamilton’s second round pick last spring, Kaliyev followed in the footsteps of another former American-based OHLer of Russian descent in Alex Galchenyuk, joining him in the 30-goal department as a 16-year-old. Galchenyuk was the OHL’s last underage rookie to reach the mark, doing so in 2011.

“I think I had a great season overall,” said the soft-spoken Kaliyev. “Our team has been really great this whole year and I’m thankful to my teammates for supporting me and helping to score 31 goals.”

The son of parents born in Uzbekistan, Kaliyev came to America at 11 months old, playing near his native Staten Island, NY until Major Peewee. At that point he earned a tryout with the Detroit, Mich.-based Little Caesars AAA program where he spent two seasons before winning a national championship under a former prolific OHL scorer in head coach Pat Peake with the Compuware AAA organization last spring.

The 6-foot-2 left-handed shooting right-winger burst onto the scene this past season, surpassing Daniel Cleary‘s all-time franchise mark of 26 goals as a 16-year-old rookie set with the Belleville Bulls back in 1995.

“This kid, he’s a player and he’s a winner too,” said Bulldogs head coach John Gruden, who had the opportunity to see Kaliyev playing a year-up alongside his son Jonathan with the Little Caesars program back in 2014. “A lot of the high-end kids at his age are one-trick ponies but he’s actually done an admirable job as a 16-year-old on both sides of the puck.

“I’ve played with guys of other nationalities that could speak unbelievable English,” added Gruden, a former 10-year pro, “but when you asked them to backcheck or do something they’d pretend like they don’t know English. That isn’t Arthur, he understands everything and, even though he comes across as shy at first, he does come out of his shell and the guys really like having him around.”

Citing a role model in Boston Bruins winger Rick Nash for his big-body game and powerful release, Kaliyev loves to shoot the puck. He led all OHL rookies with 208 shots on goal in 2017-18 before continuing to find modest ways to contribute come playoff-time with 11 points (3-8–11) in 21 contests.

Gruden felt Kaliyev was one of the club’s better players in Friday’s Mastercard Memorial Cup-opening 3-2 loss to Regina. The presence of countless NHL scouts and some of the lead names at NHL Central Scouting in attendance hasn’t seemed to phase the youngster.

“It’s a pretty exciting chance to play in front of so many people here,” he said. “A lot of players never get this chance. We have a really special team and we believe we can do this.”

Though he put up big numbers and thrived in his rookie season, Kaliyev continues to put the team first and will put his mind to whatever system or line combinations coaches Gruden, Dave Matsos, Ron Wilson and Vince Laise put in place.

“I’m just a rookie and I want to help the team win whatever way I can,” he concluded. “I’m just trying to play my best hockey every shift I get.”

After a team visit to Regina’s RCMP Academy on Sunday, the Bulldogs are back in action tonight after two days off, looking to recover from Friday’s loss at the hands of the host Regina Pats.

The Bulldogs square off with the WHL champion Swift Current Broncos, who are also in search of their first win tonight. RJ Broadhead and Sam Cosentino have the call on Sportsnet starting at 8:00pm ET/5:00pm PT.

For full coverage of the 2018 Mastercard Memorial Cup, visit mastercardmemorialcup.ca.