Kaliyev and Prosvetov named CHL Top Performers of the Week 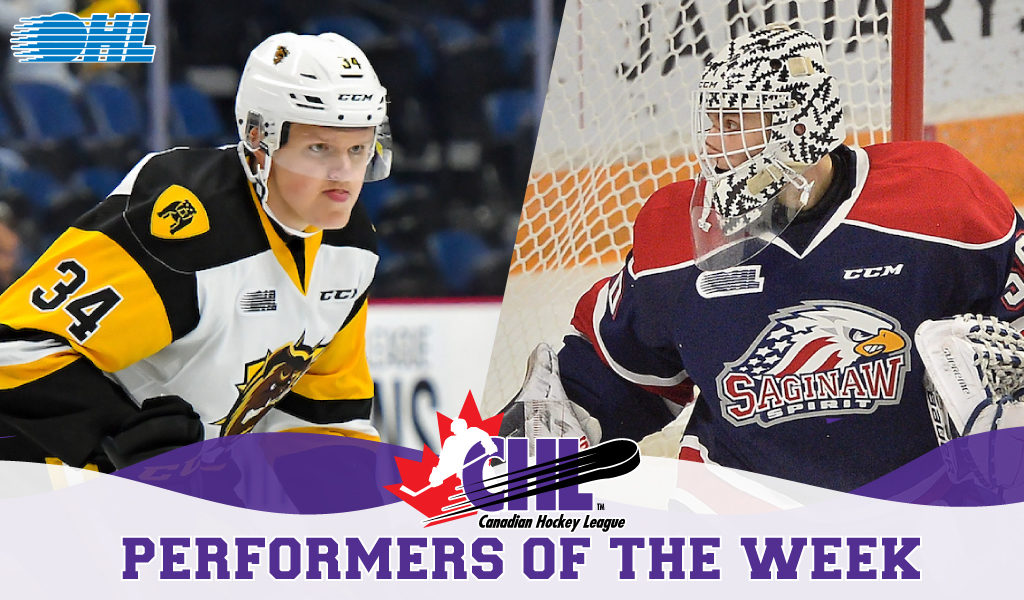 OHL standouts Arthur Kaliyev of the Hamilton Bulldogs and Ivan Prosvetov of the Saginaw Spirit have been named CHL Top Performers of the Week. Here’s a closer look at their latest performances.

2019 NHL Draft prospect Arthur Kaliyev of the Hamilton Bulldogs is the CHL Player of the Week for the regular season week ending January 6 after scoring seven goals with four assists for 11 points in four games with a plus-minus rating of plus-2.

Kaliyev helped the defending OHL champion Bulldogs earn seven of a possible eight points by producing four multi-point performances.  He closed out the 2018 calendar with two goals on New Year’s Eve in a 4-3 shootout win over the Erie Otters, then contributed a goal and an assist on Wednesday starting 2019 with a 7-1 win over the Kingston Frontenacs.  The projected first round NHL pick earned first star honours on Saturday with two goals including the overtime winner plus an assist in a 4-3 victory against the Sarnia Sting, then matched a season-high on Sunday with four points including a pair of goals and assists in a 6-5 shootout loss to the Niagara IceDogs where he was awarded third star recognition.  The Bulldogs are battling to stay in the OHL’s Eastern Conference playoff picture sporting an 18-18-3-1 record which currently puts them in eighth.

A 17-year-old from Staten Island, New York, Kaliyev was chosen by the Bulldogs in the second round of the 2017 OHL Priority Selection.  The sophomore ranks fourth in OHL scoring with 31 goals and 32 assists for 63 points in 40 games.  His 31 goals equal an impressive rookie total produced over 68 games a year ago where he compiled 48 points.  Kaliyev is among the 40 CHL players invited to compete in the 2019 Sherwin-Williams CHL/NHL Top Prospects Game and one of 11 ‘A’ rated prospects by NHL Central Scouting.

Also considered for the award this week was San Jose Sharks prospect Ivan Chekhovich of the Baie-Comeau Drakkar with two goals and nine assists for 11 points in four games, and Noah Philp of the Seattle Thunderbirds with four goals and four assists for eight points in three games.

Arizona Coyotes prospect Ivan Prosvetov of the Saginaw Spirit is the Vaughan CHL Goaltender of the Week for the regular season week ending January 6 posting a 3-0-0-0 record including one shutout for a goals-against-average of 1.00 and save percentage of .969.

Prosvetov turned aside 93 shots last week helping the OHL’s Spirit stay hot with wins in 10 of their last 11 games including six straight victories to improve their West Division record to 24-11-2-2 just one point behind first place Sault Ste. Marie.  The highlight of his week was undoubtedly Sunday’s shutout performance with an incredible 54 saves to earn first star honours of the 2-0 decision over the Sudbury Wolves.  The 54 saves is the most recorded by an OHL goaltender in a shutout effort since Sudbury’s Alain Valiquette made 57 back in March, 2011.  Prosvetov’s week also included 21 saves in a 9-1 win over the Flint Firebirds on Wednesday, and 18 saves in a 5-2 win over the Kitchener Rangers on Saturday.

A 19-year-old from Moscow, Russia, Prosvetov joined the Spirit this season after being chosen 13th overall in the 2018 CHL Import Draft.  He’s compiled a 20-6-1-0 record with an OHL best three shutout victories and powered recently by eight straight wins.  The fourth round pick by the Coyotes in the 2018 NHL Draft also has an overall goals-against-average of 3.07 and save percentage of .902.