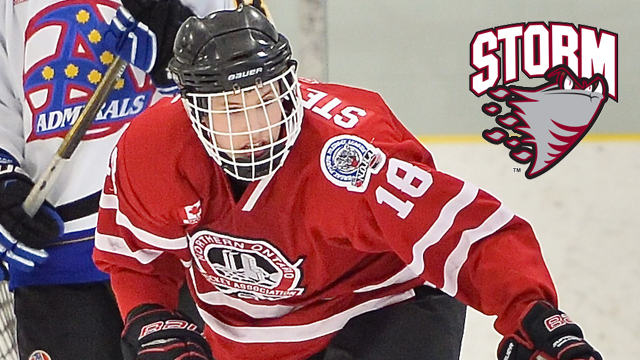 The six-foot-one, 175-pound forward spent the 2015-16 season with the Soo Thunderbirds Midget AAA team as an underage player, recording 17 goals and 12 assists for 29 points in 21 games.

The Sault Ste. Marie, Ontario spent this past season with the Soo Thunderbirds Jr. ‘A’ hockey club of the Northern Ontario Junior Hockey League (NOJHL), where he has excelled as the team’s leading rookie scorer with 12 goals and 23 assists for 35 points in 54 games, along with four points in as many games during the 2017 playoffs.

“I have had the opportunity to see Keegan a number of times over the course of his season with the Soo Thunderbirds, and each time I came away more and more impressed,” General Manager Mike Kelly said. “Keegan has added size since we selected him last April and it is evident that he is a much stronger and more confident player.”

Keegan is a second-generation OHL talent, as his father Jeremy played for the Cornwall and Newmarket Royals before finishing his junior career with the Sault Ste. Marie Greyhounds. Following his junior career, spent 15 years playing professionally including 207 NHL games.

“He has played both wing and center and is equally adept at both positions,” Kelly continued. “Keegan is a good skater who possesses above average skill and hockey sense. We look for Keegan to be a very important contributor to the Storm’s future success.”

Keegan will join the Storm at the 2017 Training Camp in August.