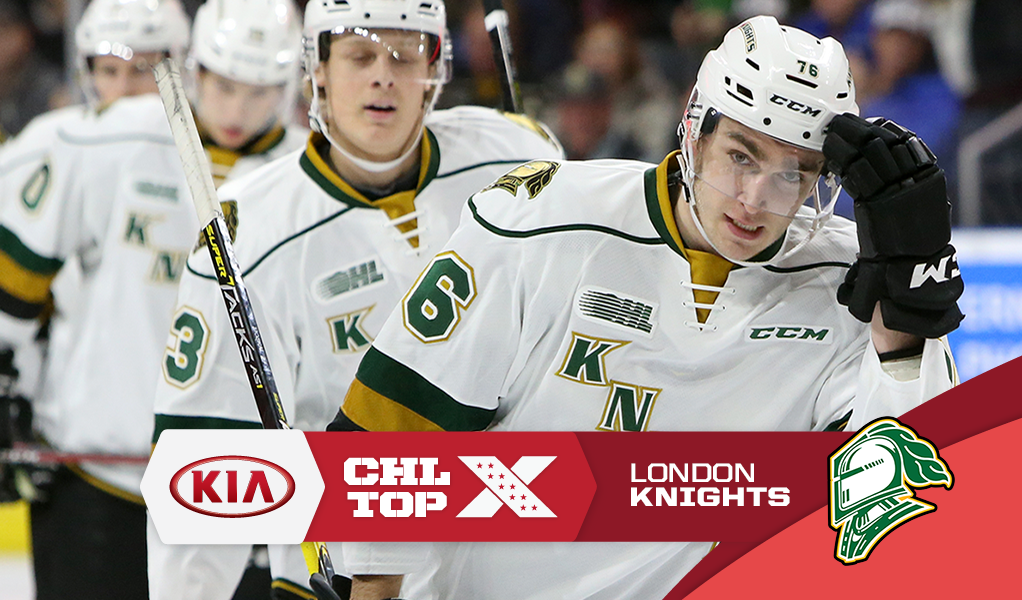 The majority of camp attendees are expected to return to London for the coming campaign to increase the odds for the ever consistent Knights who have qualified for the playoffs in each of the past 19 seasons which has led to four OHL championships and two Memorial Cup titles.

The departure of captain Evan Bouchard and Swedish import Adam Boqvist from the blue line will mean London will rely on new anchors such as NHL prospects Alec Regula (Detroit Red Wings) and Hunter Skinner (New York Rangers) to lead the way and hope that some of their up-and-coming rearguards will grow into greater roles as the season progresses.

“It’s simplifying things. You don’t overload them,” explained assistant coach Dylan Hunter, per Ryan Pyette of the London Free Press. “There’s a lot of board work and video. You get the ‘D’ zone, then the neutral zone, and the offensive zone is last. A lot of guys haven’t seen these systems. We’re trying to get them to talk and know where they are on the ice, get the structure down, and hopefully get the transition down a little better.

“It’s who’s understanding the breakouts, who’s taking, who’s reading a 3-on-2. We know what they are skill-wise. There is a lot of talent and it’s who can quickly adapt to a higher pace and what sinks in of what we throw at them.”

Sticking with the back end, London also looks to be strong between the pipes with returning netminder Jordan Kooy (Vegas Golden Knights) ready to assume the starter’s duties. The 19-year-old will take the next step this season after appearing in 26 contests a year ago in which he came away with a 16-6-2-0 showing alongside a .908 save percentage. The Bradford, Ont., native then got the call in the postseason as he appeared in all 11 of London’s playoff games prior to the team falling in the second round following a hard-battled seven games versus the eventual J. Ross Robertson Cup champion Guelph Storm.

While London is primarily an experienced group, this year will also see the team reap the rewards of youth development, particularly 17-year-old left-wing Antonio Stranges, a soon-to-be sophomore and 2020 NHL Draft hopeful who could push the club’s active streak to six consecutive first-round selections when the NHL Draft kicks off next June. In all, the Knights have produced eight first-round NHL Draft choices since 2015, with Stranges, who wrapped up his freshman season with 13 goals and 21 assists, projected to be the next Knight to hear his name called in the opening round.

Meanwhile, it also promises to be a busy year behind the bench for longtime head coach Dale Hunter, who will earn recognition on the national stage this season when he guides Team Canada at the 2020 IIHF World Junior Hockey Championship in December. The Petrolia, Ont., native enters his 19th season with the club and is set to achieve a major milestone of 800 career wins. Since stepping the bench in 2001-02, the former Capitals captain has collected 777 victories, trailing only Brian Kilrea (1,193) and Bert Templeton (907) in Ontario Hockey League history.

With seasoned veterans and valuable depth throughout the lineup, it once again promises to be an exciting year in London, where the Knights’ first step toward the Memorial Cup Presented by Kia begins Friday at home against the Peterborough Petes.