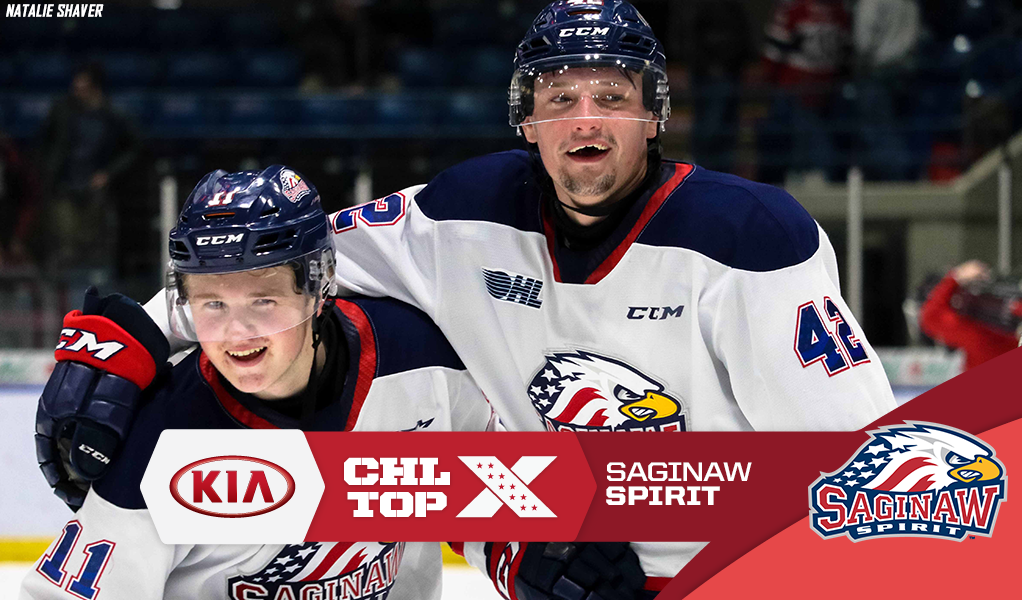 As the season enters its second half, the Saginaw Spirit are recognized as an honourable mention in the latest Kia CHL Top-10 Rankings.

Following the holiday break, the Spirit have come away with a pair of victories over the Windsor Spitfires and Soo Greyhounds to push their current win streak to six games. In all, the Spirit own a 21-10-2-2 showing on the season, good for 46 points and second place in the Ontario Hockey League’s West Division.

Leading the way for the Spirit this season is top NHL Draft prospect Cole Perfetti who has collected a team-leading 55 points counting 20 goals and 35 assists through 34 appearances. Currently riding a five-game point streak – a stretch which includes four multi-point efforts – the Whitby, Ont., native is the primary offensive driver for the Spirit, with his recent showings including a 5-4 overtime victory versus the Sarnia Sting in which he finished with three assists including a helper on the game winner en route to first-star honours. It’s that sort of production that makes Perfetti a projected first round selection come draft day in Montreal.

“(Perfetti’s) extremely high hockey IQ allows him to find open ice and beat defenders, which gives him endless scoring opportunities,” says Sportsnet’s Sam Cosentino. “(He is) consistently willing to improve his game and sees the ice so well that he can play a step ahead of the competition.”

Beyond Perfetti, the Spirit also receive offensive support from a bevy of talented forwards including 20-year-old right-wing and New York Islanders prospect Cole Coskey, the franchise’s all-time games played leader, whose 43 points over 35 games sit second in team scoring. He’s followed by team captain and Minnesota Wild draft pick Damien Giroux coming in at 22 goals and 14 assists for 36 points in 34 games, and fellow veteran forward and New York Islanders up-and-comer Blade Jenkins is also in the mix with 21 points in 28 games. Saginaw has also received a modest first-year showing from rookie centre Ethan Cardwell, the 33rd overall pick from the 2018 OHL Priority Selection who has tallied 11 goals and seven assists for 18 points in 33 contests.

On the back end, the Spirit have witnessed a phenomenal contribution from first-year Belarusian blue-liner Ilya Solovyov, the 53rd selection in the 2019 CHL Import Draft who has shown no difficulty in adapting to his debut season in North America as he is producing above a point-per-game pace with three goals and 24 assists through 26 appearances to sit first in scoring among all Saginaw defencemen.

Best illustrating Solovyov’s ability to make an immediate impact in a new environment came in his third-ever game with the Spirit that saw him amass five points in a 9-3 victory versus the Sarnia Sting in which he was honoured as the game’s first star. In all, the 19-year-old has put himself on the draft radar in playing a major role on a blue line that also counts 2019 Philadelphia Flyers pick Mason Millman and 2017 Detroit Red Wings choice Reilly Webb.

Between the pipes, following the departure of last year’s star netminder Ivan Prosvetov, the Spirit turned the reins to the young tandem of Marshall Frappier and Tristan Lennox. The two have seen nearly even playing time this season, with Lennox outpacing Frappier by a 19-17 margin, though the latter leads in the wins column as he has come away with the victory in all but five of his appearances. The 19-year-old has caught fire in recent weeks, including his past two outings that came versus the Windsor Spitfires and Soo Greyhounds in which has combined for 50 saves while surrendering just two goals.

The defending West Division champion Spirit have truly been soaring lately despite the slow start to a season full of expectations and now seem primed for an exciting second half. They’ll look to climb the ranks and continue their winning ways in the New Year with upcoming dates against the Kitchener Rangers, Oshawa Generals, and Sarnia Sting.