Kings of the Blue Line: Phillips and Durzi on the same path 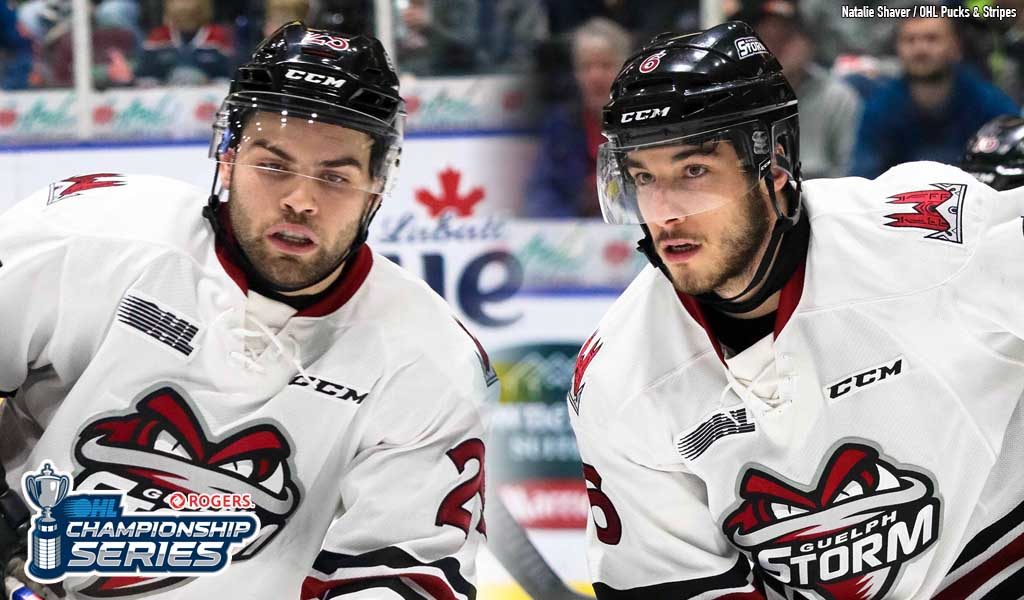 They started out together in Owen Sound, are teammates in Guelph and as of January 28th are both Los Angeles Kings prospects.

Close friends Sean Durzi and Markus Phillips have helped the Storm through one of the wildest playoff rides in recent OHL memory, twice recovering from 2-0 series deficits to win a pair of Game 7’s on the road against Midwest Division champion London and West Division champion Saginaw.

Heading home to Guelph following a pair of losses in Ottawa, the two veterans are ready for yet another challenge against a 67’s club that holds the OHL’s best-ever playoff record of 14-0.

.@SeanDurzi has signed a three-year, entry-level contract with the LA Kings 🙌 https://t.co/3Zi1871pUH

“It’s good that Philly and I can bring our experiences from previous seasons,” said Durzi, who reached the Western Conference Final with Phillips in Owen Sound two years ago. “We’ve won a lot of series together and faced a lot of adversity, so what’s a little more? A challenge like this is nothing new to the both of us so we’re ready to go out and give it everything we’ve got.”

Along with Evan Bouchard (London Knights) and Ryan Merkley (Peterborough Petes), Durzi is one of three OHL defenders to record a point-per-game in each of the last two seasons. He’s had some injury setbacks throughout this time in the league, but put up 37 points (11-26–37) over 35 games between Guelph and Owen Sound this season. He’s gone on to add 20 points (3-17–20) in as many playoff contests.

Chances are one of the two will be on the ice for the Storm at any given point in the game as they make up a big part of a talented defence corps that also consists of Edmonton Oilers prospect Dmitri Samorukov, former second overall OHL Draft pick Owen Lalonde, 2018 OHL champion Jack Hanley, big 6-foot-7 Toronto Maple Leafs pick Fedor Gordeev and 16-year-old former first rounder Daniil Chayka.

“We’ve got some real good defencemen here, no question,” said Phillips. “Even Chayka slotting in as our seventh guy is probably going to be a high NHL Draft pick down the road, so the future is bright and we’ve got a group of guys that can all play and know their roles.”

The two Toronto-area products received some surprising news in late January when Durzi was dealt from the Toronto Maple Leafs to the Los Angeles Kings in a deal that saw former OHL Defenceman of the Year Jake Muzzin go the other way.

Durzi, who signed his entry-level deal with the Kings on April 1st, had the pleasure of seeing Phillips do the same last week.

“Knowing Philly for a long time now, seeing how hard he works and how much he puts into the game, it’s nice to see the game give a little bit back to him.

“I’m thrilled to have him along for the ride next year and I’m looking forward to what the future holds for both of us.”

Phillips, who partnered with OHL Defenceman of the Year Evan Bouchard (London Knights) on Canada’s National Junior Team this past January, put in the work of losing 15 pounds this past summer after Kings brass advised him to improve on his off-ice conditioning.

“I had a meeting with Sean O’Donnell and Mike O’Connell at Development Camp last spring and they sat me down and basically told me that if I want to make the NHL I’m probably not going to be an Erik Karlsson-type defenceman. I’ve really worked hard at my conditioning and trying to take better control on the defensive side of the puck. It’s paid dividends for me.”

The man overseeing the Storm’s deep defence corps, assistant coach Jake Grimes has no shortage of options when it comes to deciding who to employ in specific situations. The two trade deadline additions can go up against the opposition’s top shooters.

“They’ve added a lot to our team and it’s no coincidence that they’ve been doing a lot of winning wherever they’ve played,” said Grimes. “Their attitudes, their levels of communication, positive attitudes and work ethic are all big reasons for their success in the league.

“They’re going to be great pros and they’ve had a lot to do with why our team has made it this far.”