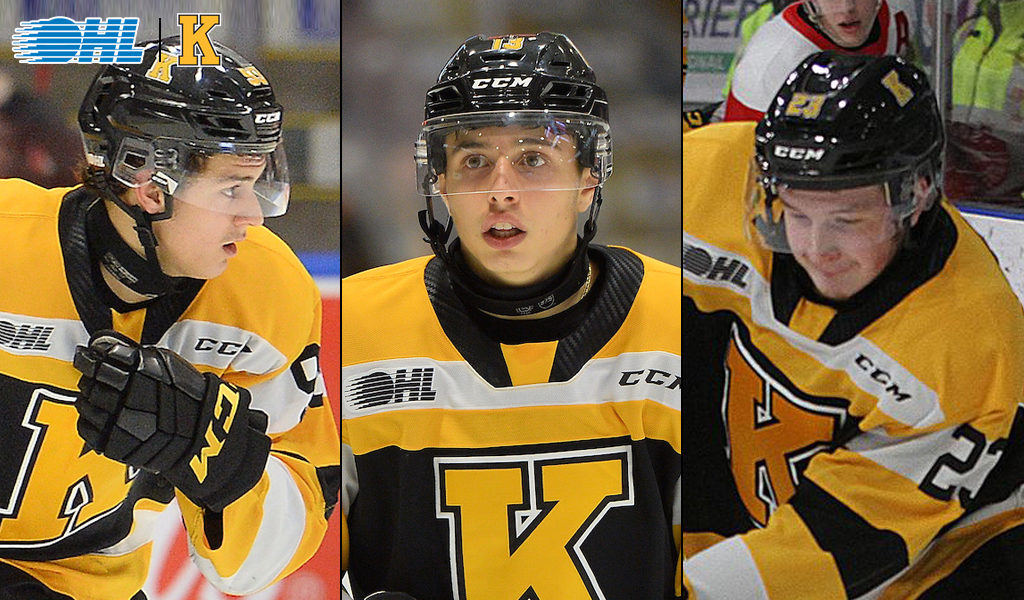 Stronger, faster, and altogether better – that is what the trio of Francesco Arcuri, Maddox Callens and Ethan Ritchie are hoping to be, entering their second year in the Ontario Hockey League with the Kingston Frontenacs.

All three have been in their hometowns across Ontario through the offseason, and each has had similar, yet different summers.

Unlike the beginning of a regular offseason, ice was largely unavailable after COVID-19 triggered the cancellation of the remainder of the 2019-20 season, but even without ice, the three knew improving was possible.

“Over quarantine, I focused a lot of time on my shot. It’s a lot quicker, harder and more accurate,” said Ritchie, who also spent time trying to get faster, improving his all-round game. “I cut some weight down, so I should be faster this season and get to some of the pucks I couldn’t chase down.”

While Ritchie spent time on his shot with rinks closed, all three focused on fitness, accelerating them for when they got on the ice. Since returning to the rink, preparation has only picked up.

“I’ve been training with a shooting coach and a skating coach,” said Callens, who is taking a similar approach to the specifics as to the others. All three have been heading to their local rinks 5 to 7 times a week, often with coaches and guidance, as they approach their sophomore seasons.

Improvement is critical to any offseason, but for any player coming off a rookie campaign, there are some moments that stick out and make them strive to be even better.

Ritchie recalls a shift against Ottawa where he could not win a physical battle, Arcuri remembers being inconsistent at times, and Callens knew he was overthinking. All those moments are things rookies go through, but with a year under their belts, each of them knows they will be better when play resumes.

“I’m going to play my game this year, I know what the league has to offer, and I know I can be better,” said Callens from his home in Langton, Ontario. For Ritchie, learning to win the physical, net-front battle is tough with the current COVID-19 restrictions, allowing six people on the ice at once, but he is confident that when things start to heat up, he is in a place where he can be better than last season.

Although training, skating, and preparing are exciting for the former rookies, they are all itching to get back to Kingston, and back to hunting down an OHL championship with the Frontenacs. “I miss it all.  The city, the routine, being close to downtown and representing Kingston,” said Ritchie.

While returning to Kingston is exciting, all three are also exhilarated to begin working with new Head Coach and General Manager, Paul McFarland.

“He’s been in contact with all of us, sending videos, making sure we’re ready to go when camp starts. It’s been great,” said Arcuri, while Callens expanded on how the former NHL assistant head coach is bringing a serious winning mentality to the locker room, something the team is excited about.

The offseason has been far longer than usual, and it is not over yet, but for Kingston’s sophomore trio, returning to the ice cannot come soon enough, and they are eager to show the league how much better they can be in year two.